“The Slaughter You Know Next to Nothing About”

For some reason, I often find myself reading or listening to fiction set around the time of the First World War. This masterpiece of a novel deals with part of that history of which I was only vaguely aware. I highly recommend it.

What a moving, unforgettable and important novel this is. 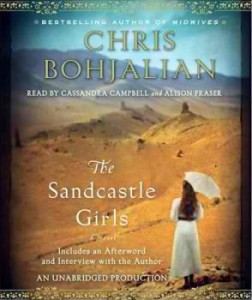 Chris Bohjalian has a well-earned reputation as a writer of thoughtful, insightful, beautifully written novels. In his 15th book, The Sandcastle Girls, Bohjalian has outdone himself.

He has written a novel that’s intensely personal and yet not overtly autobiographical. He draws on his own experience as the descendant of Armenian immigrants, but his protagonists are two women. (In addition to his other talents, Bohjalian is able to write a woman’s voice more convincingly than most male authors.) He tells the true story of the Armenian genocide, and yet manages to do so in a well plotted novel – a love story, really – that compels you to keep reading (or listening; I listened to the audio book) even as you are horrified, repelled and brought to tears.  And although he does not spare readers the reality of the atrocities, those horrors do not overwhelm the story. Life in all its richness went on for the survivors and those who worked to help them a century ago, and their stories go richly on in this novel.

If you are like most Americans, you will come to this novel with only a vague notion of the Armenian genocide (and the battles that still rage over whether it should even be called a genocide).  Tragically, all those deaths have been overshadowed by the enormity of the Holocaust that followed not many years later. One of the minor ironies made clear in this book is that many people expected the Germans to do more to rein in their allies, the Turkish regime that was trying to wipe out the troublesome Armenian Christian minority. The Germans, after all, were Europeans and more civilized, right? There is also lingering dispute about how many Armenians were slaughtered, because, as the book shows so vividly, women and children were being by the thousands into the desert, where they would die out of sight and out of mind.

To his credit, Bohjalian does not depict all Turks or all Germans as villains. He portrays in some depth, for example, two young German officers who document the horrors they saw in the encampments at Aleppo, Syria, where Armenian women and children were held before the next stage of their torturous journey. He writes about Turks who were appalled by what was happening around them and who went to considerable lengths to try to help.

The novel is woven around two stories nearly a century apart. In one, Elizabeth Endicott, a gently bred Bostonian, arrives in Aleppo in 1915 to help her banker father distribute aid, and to provide reports to the Friends of Armenia back home. A Mount Holyoke graduate and an independent spirit, Elizabeth becomes friendlier than her father thinks she should with some of the refugees. And she becomes especially friendly with Armen, a handsome young Armenian engineer whose wife and infant daughter died while he was away, unable to protect them. When Armen makes the dangerous journey to Egypt to join the British Army, he and Elizabeth begin to exchange letters.

The other story is that of Laura Petrosian, a suburban mom in New York and the writer of rather frivolous novels. Laura grew up visiting her grandparents – Armen, the Armenian immigrant, and his Bostonian wife – but not thinking much about their story. One reason she didn’t think a lot about what they’d experienced when they were young – which seemed like an impossibly long time ago – was because they didn’t talk much about it. They told bits and snippets, anecdotes, about their early lives, but there always seemed to be a lot that went unsaid, and an overriding feeling of sadness and secrets.

Then one day an old friend calls Laura to tell her she’s seen a photo of Laura’s grandmother with a newspaper article about an exhibit at a Boston museum. And against her husband’s loving advice, Laura sets out to learn more of the story. She uncovers more than she expected, more even than her grandparents had told each other. She is saddened, shocked and changed, as the reader will be.

When I listen to an audio book, I consider whether reading the book in print would be more or less satisfactory. This is an excellent recorded book, made especially good by the decision to use two women with quite different tones to read the two interwoven story lines. But it would be at least equally satisfying to read Bohjalian’s prose in print.

The medium does not matter nearly so much as the message. This book teaches us about an almost forgotten chapter of history, and it also teaches us about the power of love and family – family that stretches across generations and affects us in ways we may not fully comprehend. Listen, or read, and ponder.