I love it when Bob Moyer is in reading/reviewing mode. So many books to add to my list…. 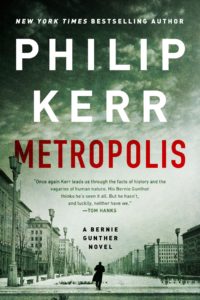 In 13 books, Philip Kerr established detective Bernie Gunther as a German noir  detective equivalent to Raymond Chandler’s Marlowe. He also established himself as not just a great mystery novelist but also one of the best novelists of his generation. Knowing that he was dying, he made a masterly stroke in a masterful career with his fourteenth book — he ended his career by taking us to the beginning of Bernie’s career as a cop in Berlin.

It’s 1928 Berlin, and the city teems with prostitutes, World War I veterans begging on the streets and dangerous crime organizations. It also swells with authoritarianism, anti-Semitism, nationalism and incipient Nazi violence, all elements that will surge through the 13 books that travel through the Nazi era and subside into the Cold War. Bernie begins his ride on that surge here, looking for someone who kills prostitutes, then scalps them. While he is working on that case, the killings stop, and someone starts shooting veterans begging on the street, with a bullet to the head. Bernie shows flashes of his skill, a skill that will haunt him in his future when he has to use it for the Nazis. He intuits that it’s the same person. Plunging into the netherworld of the streets, he goes looking for evidence. When one of his colleagues asks him what he’s looking for, Bernie answers he doesn’t know, “…but I’ll know it when I see it.”  It’s this ability that will make him indispensable to the Nazi hierarchy over the years. He will be of service to them while he tries to save his soul.

All the while, Bernie shows signs of struggle with booze and women — he can’t avoid either. Fortunately, he discovers here the equilibrium that keeps him level most of the time in years to come. In the midst of the demi world of disadvantaged, he stops feeling sorry for himself. His life is not that bad, and “You can’t put a price on good fortune.”

True to form, however, Bernie can’t keep a good woman. Brigitte is the first, but not the last, to tell him that she can’t stay with him. “…you can fake a smile, but you can’t fake what’s in those blue eyes.” She doesn’t like what she sees there, and she knows it will only get worse. We know it does.

When he finds the killer, someone gets to him before Bernie does. “Justice” is done, but for the first time, Bernie realizes that the rule of law means more. He makes the decision to stay on this side, and not join the evil to stop another evil. That dilemma occurs for him time and again, but this is the only time we hear him articulate the coda that carries him through the years:  “I have standards, and I try to live up to them.” It’s that struggle that informs Kerr’s well-wrought mysteries.

His mysteries are also well informed by the factual landscape into which he weaves his fictional crimes. Every Kerr book is a history lesson, as he crams in locale, local police, actual criminal cases and historical characters. We bump into the artist George Grosz, we listen to Lotte Lenya rehearse “The Threepenny Opera,” we visit the Sing Sing night club where the entertainment is an electric chair, we tour the morgue, which is open to the public for viewing. Kerr then identifies these people and places in a lengthy note at the end.

Metropolis stands as a capstone novel to the careers of Bernie Gunther and Philip Kerr. R.I.P., fellas.