A novel to savor

In many circles, Bob Moyer is better known for his haiku than for his book reviews. I offer him this lead-in to his latest review:

Bob is in heaven 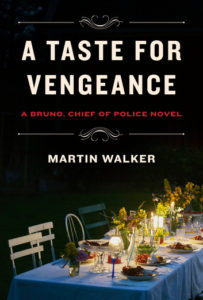 Taste is everything and everywhere in a Bruno, Chief of Police novel.

When his friend Pamela calls him to check on a guest who did not appear for her new cooking school, she asks Bruno if he wants to stop by to sample her blanquette de veau. After all, there’s an extra serving now. He can’t resist.

To celebrate Bruno’s promotion to chief of police for the entire valley, not just the village of St. Denis, every village mayor, every policeman in St. Denis, every veteran and friend show up for the ceremony. Afterwards, everyone settles in for a meal, including a tasty tarte au citrone.

Bruno interrupts his investigation of what looks like a murder/suicide involving Pamela’s missing student to demonstrate his foie gras recipe for her cooking school. Then he lets them try some that he made before he came. The students, and reader, are transported.

When the murder takes on international implications that stretch from Ireland to Iraq, Bruno, of course, must entertain the two terrorist specialists who arrive from the U.S. and the U.K. He treats them to lunch at his friend Ivan’s restaurant, where they sample jambon de pays with melon, from the menu du jour, while they serve up theories about the case at hand.

In what has become a tradition in this food-porn series, Martin Walker brings all the main law enforcement personnel together at Bruno’s farmhouse, where they may not only savor the magret de canards that Bruno prepares with loving detail, but also savor the idyllic life that he lives in the French countryside. Appropriately, the duck is dished up with a glass of Monbazillac, murmurs of ecstasy and a summation of the case to date.

In every Bruno novel, the crime is the main course, in this case served up with A Taste For Vengeance. Killers lying low in the local countryside create a complicated stew for the assembled law enforcement agencies, but it is Bruno who uncovers what is both a personal and political plot of revenge. Once again, Bruno finishes a case with a flourish and leaves us with the comforting fact that, no matter how serious the crime — he will always stop for lunch.