As you surely know by now, in April we will mark the 100th anniversary of the sinking of the Titanic. Kate Alcott, a journalist, has, with admirable timing, given us an anniversary present of sorts: a first novel that draws deeply on the rich, true story of the infamous shipwreck. It’s available in print and as an audio book. I spent 11 fascinated hours listening to the audio version. 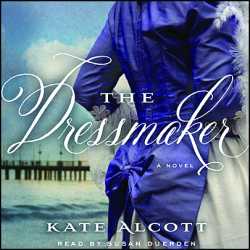 Tess Collins is working as a household servant, but she wants more out of life. When she talks the world-famous fashion designer Lady Lucile Duff Gordon into taking her on as a last-minute replacement for her maid on a voyage to New York, Tess can hardly believer her good fortune. Lady Duff Gordon is mercurial at best and downright cruel at times, but under all the moodiness, she seems genuinely fond of Tess.

Unfortunately, though, the ship taking Lady Duff Gordon, her husband and Tess to New York is the Titanic, and on that April night when the grandest ship in the world hits an iceberg, everything changes.

Tess and the Duff Gordons survive, but she scrambles into one lifeboat at the last minute, saving two young children in the process, and they find safety in a lifeboat that remains suspiciously almost empty.

Reunited on the Carpathia, they all make their way to New York, where Tess begins helping the famous Lucile prepare for her annual fashion show.

The survivors of the Titanic are haunted by the disaster in many ways, however. There are the haunting memories of people crying in vain for help, of dead children, of white faces floating on the ocean in the chill dawn – victims of freezing to death rather than drowning. And there are questions, accusations and recriminations.

Kate Alcott uses her journalist’s skills to mine the considerable material available, including news coverage of the time and records of the fiery U.S. Senate hearings led by Sen. William Alden Smith. She uses her novelist’s skills to imagine feelings and events, fleshing out the facts with an engrossing story.

What Alcott produces is a good example of a historical novel well grounded in fact, with some real-life figures walking through its pages. Lucile Duff Gordon was indeed a highly successful designer whose behavior during the Titanic crisis became a raging scandal on both sides of the Atlantic. Eventually, her career and her marriage were ruined.

The real-life woman we’ve come to know through the years as the Unsinkable Molly Brown appears here, too, even joining with country-girl Tess to row the lifeboat, putting the inexperienced sailors to shame.

The rest, the author tells us, is fiction, but in her fiction she paints a realistic picture of New York in 1912, including the growing women’s suffrage movement. Tess gets to know Pinky Wade, a scrappy female reporter for The New York Times who’s covering the aftermath of the sinking, and becomes friends with her in spite of herself.

In some ways, Alcott may be trying to give readers too much. The main thread of the plot is a romance. Tess faces many choices as she tries to decide if she wants to make it completely on her own in this new world, or with the help of one of the two men who became part of her life on the Titanic.  True to one of the major themes of much Titanic lore, the romantic struggle is also a class struggle: One of the men who loves Tess is rich and privileged; one is a fellow immigrant trying to carve out a place in the United States.

Surrounding this love triangle we have the fascinating history of the Titanic, the dramatic senatorial hearings and the guilt that the survivors deal with in various ways.

Some critics have charged that the romance is too mundane and predictable, or that the book takes off in too many directions once Tess and company reach New York.

I didn’t find the romantic plotline objectionable, even though there’s so much strong material in the novel that I wondered if it was necessary. In a way, though, it might be needed for verisimilitude: A young woman immigrant of very modest means would have found the going very tough without a man in early 20th-century New York. In any case, this is a good story, well told, and gave me more insights into the enormity of the Titanic’s sinking than did the movie several years ago.

The Dressmaker is a great book for listening. Alcott’s descriptions create vivid mental images. Susan Duerden’s dramatic reading is excellent, although I must say the brash voices she gave American women such as Pinky Wade and Molly Brown made me wonder what those on the other side of the pond think of us!