Soldiers, assassins, music and food – Bruno is on the case again

What can persuade Bob Moyer to take time out from his busy schedule to read a book and write a review? The answer is simple: a new Bruno, Chief of Police novel by Martin Walker. The Bruno novels are always a delicious treat, and it sounds as though this one keeps the tradition alive. 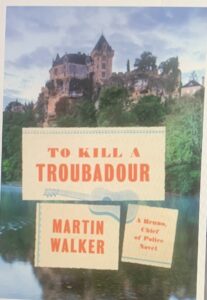 Not much changes in the Dordogne town of St. Denis. Bruno jogs every morning, followed by his faithful Bassett Balzac. Every afternoon he takes his horse Hector from his friend Pamela’s stable and rides him along the ridge. He even finds time every now and then for a brief tryst with Pamela herself. When a helicopter full of soldiers lands in his yard at noon, Bruno does what he always does for guests — he whips up a meal for them.

Soldiers in St. Denis? Of course. Not much changes in a Martin Walker novel. A few pages into the book, and the tiny town has once again become the center of an international situation that involves all of the French security agencies, three other countries’ security agencies, diplomats, countless soldiers, sniffing dogs, Bruno’s former girlfriend Isabel, and, of course, Bruno. It seems a local group, Les Troubadors, has made popular a tune called “A Song for Catalonia,” which the Spanish government has banned because it fans the separatist flames in Catalonia. At the same time, a wrecked car with a sniper bullet and a golf bag is found nearby, and everyone suspects an assassination plot by a Catalan terrorist organization. Everyone also quickly supposes an attempt on the life of the song’s writer, who will appear at the annual riverside concert in St. Denis, produced by Bruno — of course.

It will take Bruno the rest of the book, however, to find the real means of the attack. That’s where all the international attention and coded communication stem from. While all the kerfluffle continues, local life goes on. Bruno and Pamela enter the local tennis tournament and get through the first round. Florence the local computer genius needs Bruno’s help to keep her ex-husband in jail. And Bruno gets to help prepare both a boar and a lamb for roasting. He’s so busy he doesn’t get around to dishing up the requisite food porn of one of his meals till the very end of the book. That section (nine pages long) makes for two climaxes within pages — Bruno’s meal, and his stopping the assassin. Take your pick; they are both very satisfying.