Thanks to Bob Moyer, I have another addition to my already lengthy must-read list. Martin Walker’s Bruno novels are pure pleasure, even if they do make me hungry. 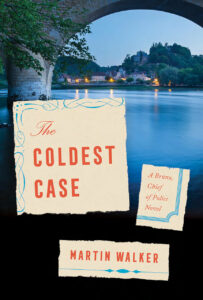 In a Bruno, Chief of Police novel, the past is never past; it’s always present. Author Martin Walker consistently pries a piece out of the storied past of the French Dordogne region, and attaches a murder to it, with unvarying ingenuity. For added interest, he usually makes the event significant enough to attract national and/or international attention to the case and the small town of St. Denis. Each series installment, complete with a claque of consistent characters in a Perigordian atmosphere, provides ample entertainment.

The latest issue is no exception. Bruno takes a skull from The Coldest Case in the region, a 30-year-old murder, and has it forensically reconstructed. The result, with a little DNA help, leads to a local inhabitant. He may, or may not, have been there 30 years ago. While Bruno collects clues, the German government releases previously unseen Stasi files from East Germany. The suspect may or may not be in those files, but they are unavailable to France — they’ve only been released to the British and American governments. That omission creates a political kerfuffle, incited by a pundit based in—of course—St. Denis. Add a wildfire created by global warming bearing down on the region, and Bruno has ample opportunity to display his boundless ingenuity, solving the crime while reporters, government agents and the fire descend on St. Denis.

Of course, the crime and accompanying accoutrements are just camouflage for Bruno’s true love — cooking. Once again, the centerpiece of the story is an eight-page dinner Bruno prepares for everyone drawn into the case. By the time the ecrivesses a la nage are washed down with the chilled Monbazillac, both the diners and the reader are sated.

Just as the co-op vineyard in St. Denis produces a consistently good wine each year, so Walker comes up with a tasty product as well. The Coldest Case is vintage Bruno.