Bob Moyer has returned from his latest adventures to give us another fine book review. 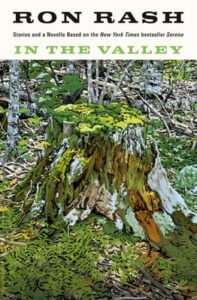 There’s gold in them thar mountains. North Carolina mountains, that is, and Ron Rash knows how to mine it. Critics frequently call him an Appalachian writer, but he is flat out a Tarheel troubadour. He roams through the countryside and years, gleaning nuggets of stories out of lives and the land. A Union widow in a Confederate area burns her own barn when the Union forces pass through leaving her home unharmed. A Vietnam vet who flies helicopter tours marvels as children run toward his helicopter instead of away when a father barred from his children drops presents to them. A kidnap victim held for ransom descends into drugs but then surfaces to regularly visit the man who held her hostage  in prison. A sea change in mountain ways occurs when a son changes his father’s mountain handshake on business deals for a written contract. Nine new stories in all carry us through daily life, deaths, acts of decency, and a few of bravery.

The heart of the book, however, is the novella sequel to Rash’s hit novel, Serena. In it, the lethal widow who ostensibly killed her husband returns to the mountains as owner of the logging company. She continues her murderous ways, destroying the land and many lives to meet a contract. Animals, birds, critters of all sorts flee before her advancing greed, as she and her henchmen push the workers not just to the edge but over it. Rash here brings his knack for speech rhythms that flow like rivers down the mountainsides, phrases and patterns of speech from another time. He also brings in the mountain trope of the visionary crone on the path of the woman who cost her son his hand. This taut tale complements its predecessor with a satisfying resolution.

Forgive the double negative, but there’s nothing not to like about this book. Rash is not just a North Carolina writer, he’s the best.