Philip Kerr, one of Bob Moyer’s favorite authors has died. Bob reviews his newly published book, amid reports that there may be one more yet to appear. 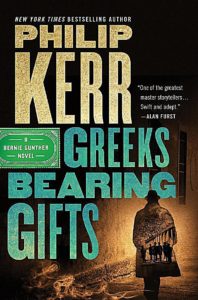 During the course of this venerable series, Philip Kerr has given us a tour of that most horrific event in human history, the Thousand Year Reich of Nazi Germany. His protagonist, Bernie Gunther, has served as an expert guide on our journey from the choice position the author has crafted for him.

At the beginning, Bernie was just a talented Berlin detective who avoided politics — until they came to find him. Brilliant at his job, he became, in Kerr’s narrative, the go-to guy to solve fictional mysteries inside the (well-researched) framework of the Third Reich. As the series progressed, the reader was privy to ingenious murders solved in hearing range of historic events, in effect, crime inside crimes. Bernie was perfectly positioned to throw light on the evolving horror.

He is also poised for another perfect perspective — moral ambiguity. Not a Nazi himself, Bernie was tolerated by the hierarchy because of his talent, but his tongue frequently got him in trouble. He was dogged constantly by the dilemma of saving his skin, or saving his soul. Once again, the reader was privy to his inner dialogue, which rendered him the degree of respect afforded the best of hard-boiled detectives.

The war is over in the last few books, and Bernie has been running from his past, and his mortality. When he looks at his watch, he doesn’t see what time it is, he sees “…the time that was.”  After his last escape from the south of France, he took on a new identity in Berlin, and pulls down a job ideally suited to him — insurance investigator. Dispatched to Greece to investigate the claim of a sunken ship, he discovers that the current crime relates directly to a war crime. The past is never past in this narrative, it is always present. Unfortunately for him, he is present with a corpse when the police catch him. The cop who has the case also has an agenda he compels Bernie to work on — a war criminal who apparently has resurfaced — or he will charge Bernie with the crime. Once again, Bernie is forced to apply his talents at the service of an authoritarian agency. He is not happy.

But he is still observant, and he guides us through a countryside where Western values were born, in contrast to the ravages committed by the occupying forces as well as the corruption of the current forces. He of course untangles all the intricacies of past crimes surfacing in the present, and wreaks his own special justice because “…nothing is more compelling to a man nearing the end of his useful days than the sudden realization that he has the chance to do one good thing.”

Philip Kerr passed away in March, and reports say he left one more book. He also left at the conclusion of this book one good thing, the best description of the intuitive process accessible to us all but perfected by Bernie. A criminal asks Bernie how he solved what seemed an unsolvable crime. Bernie answers that he went into his office, shut the door, “…with orders that under no circumstances was I to be disturbed. Only that way did I ever find the time to think. You’re wasting your time if you don’t find time to waste. Letting your mind wander above the clouds like Caspar David Friedrich is what makes a detective any good.”

Thanks for the advice, Bernie. And thanks for Bernie, Philip. We’ll miss both of you.