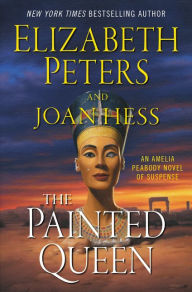 Fans of Elizabeth Peters’ beloved Amelia Peabody series can enjoy this final installment if they read it as light entertainment, a glimpse of sorts of the beloved characters and perhaps a reminder of just how extraordinary Peters was. But if they focus on comparing it to what Peters might have written herself, they will likely be disappointed.

But then, Joan Hess took on what was probably an impossible task when she agreed to finish The Painted Queen, the Amelia Peabody novel Peters was working on when she died in 2013 at age 85. Peters had done considerable work on the book, but it was not anywhere near finished. Nor were the notes Peters left comprehensive or even easy to read. On the plus side, Hess, a mystery writer herself, was friends with Peters for decades, and the two had discussed the book as Peters worked on it.

As to the story: Although it was the last book Peters wrote about Amelia and her family of archaeologists in Egypt, its setting is actually between the 1999 book The Falcon at the Portal, set in 1911-12, and her 2000 book He Shall Thunder in the Sky, set in 1914-15. Nefret, the Emersons’ adopted daughter, is still recovering from her brief, disastrous marriage to the late Geoffrey Godwin, and she and Ramses, the Emersons’ son, who (as fans know, so this is not a spoiler) eventually marries her in a later book, are ill at ease with each other.

The action begins in fine form, with a man bursting into the bathroom of Amelia and Emerson’s elegant Cairo hotel suite while Amelia, weary from travel, is trying to relax in a bubble bath. The man, who turns out to have a knife protruding from his back, drops dead after gasping “Murder.” Oddly, the mysterious man is wearing a monocle, and he is carrying a card that says “Judas.” Adding to the drama, a note saying only “Where were you?” is pushed under the hotel suite door, apparently meant to chide Emerson for not having protected his wife himself.

Before long, more monocle-wearing and murderous men appear, posing threats to the Emerson family. Meanwhile, Amelia, Emerson and their entourage head for the excavation site at Armana, where they will be on hand for the discovery of the long-sought bust of Nefertiti. But odd things are happening at the site, as well as in Cairo.

Tension mounts, as the Emerson family deals with mysterious villains, faked antiquities and criminals including Sethos, the master of them all and an ardent admirer of Amelia. In the background seethes the political intrigue and jockeying for strategic positions that foretell the coming great war in Europe.

In other words, the book has all the makings of a fine Amelia Peabody novel, with lots of lore about Egyptian history and the competitive world of archaeological digs, and ample opportunities for Amelia and Ramses to rush off on dangerous adventures.

So what’s the problem? It’s not so much that while Hess is a mystery writer herself, she is not an Egyptologist or a scholar, as was Peters, whose real name was Barbara Mertz. Hess did have an archaeological consultant, and for the lay reader at least, those details are convincing enough.

The problem is subtler than that, and the best way to explain it may be to say that Elizabeth Peters was a genius, and genius cannot be fully imitated. Ardent fans of the series will – and already have – found some discrepancies in facts and time lines, which is understandable, given the number (20) of books, all brimming with details. Nor is this the first novel in the series to have been written out of chronological order, so it would be easy to make minor errors.

More troubling are the ways in which the characters are just a bit off. Hess does a pretty good job of mimicking Peters’ tone and dry humor, but there are times when Amelia, or Ramses or Nefret or even one of the servants just doesn’t act or talk quite like him or herself. Some indefinable something is missing.

Or maybe it’s not so indefinable – it’s simply that Elizabeth Peters is missing. I enjoyed the book sufficiently to be glad that Hess’ labor of love and friendship brought it to us, so that fans could have one last taste of the story. But reading it made me realize anew that in Elizabeth Peters, we had a treasure. Sadly, that treasure cannot be duplicated.