Portrait of the artist as a young resistance fighter

Ah, what a heady thing to be an aspiring young writer in Paris – until the Nazis come 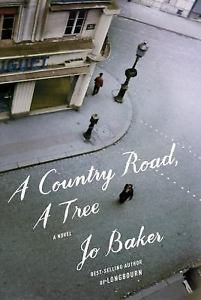 goose-stepping in. In her new novel, A Country Road, a Tree, Jo Baker vividly brings to life the horrors of the German occupation of France in World War II.

Baker is the British author who gave us Longbourn, a delightful retelling of Pride and Prejudice from the viewpoint of the downstairs servants. Her new novel is a triumph of imagination applied to real, historical events and specifically to the effects living in a world of horrors had on one sensitive, introspective and brilliant young man.

Although she does not tell us his identity in the main part of the novel, the young man Baker is writing about is Samuel Beckett, the Irish playwright and poet. If reading the book prompts you, as it did me, to do some research, you will see that Baker’s fictional account closely follows Beckett’s real-life story.

This book is intensely personal, showing us the impact of the historical events on this young man who would survive and become a considerable literary presence. With him, we see the Nazis assert control over Paris. Through his eyes, we see what it is like to, somewhat hesitatingly, join the resistance, and to live with constant fear for himself and his friends and associates.

Eventually, the young man and his girlfriend, Suzanne, must flee Paris and seek refuge elsewhere. This is not so much a story of wartime resistance as it is a story of how a creative soul who wants to be a writer deals with a world gone mad, and how those experiences help mold the writer he eventually becomes.

The book starts off slowly, establishing the young man’s sense of inadequacies and following him as he decides to return to Paris even though, with war on the horizon, he would be safer staying with family in Ireland. In the audio version, David Rintoul’s reading helps to draw the listener into the increasingly powerful story.

Baker describes the young man’s relationships with Suzanne and with other writers and expatriates in Paris, most notably James Joyce, whom Beckett admired greatly. She makes readers feel the hardships, the tedium and pain of long treks across rural France, the hunger brought on by food shortages, the fear of discovery and death. Our young man does not regard himself as a hero, but rather seems surprised whenever he finds himself taking part in the resistance. He finds himself thinking mostly about survival; writing would be a luxury.

Those who are familiar with Beckett’s works will, no doubt, find references and allusions in the novel in addition to its title, which applies to the setting of his famous play “Waiting for Godot” as well as a scene in the novel. But those of us who have only a passing acquaintance with his plays and poems can also be mesmerized by this story of how a creative person dealt with the immediate horrors of war while also processing them into images, thoughts and memories that would live on in his work.