East side, west side, all around the town 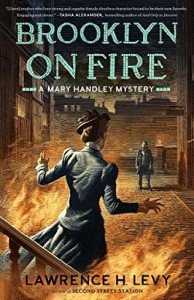 Mary Handley was the first woman to work as a detective with the Brooklyn Police Department. Her success there gained her quite a bit of fame, or maybe notoriety. She’s not giving up her day job at a bookstore, where she has a supportive boss, but she hopes one day to make her living as a detective.

When a young woman shows up wanting to hire her to look into the circumstances surrounding the death of her uncle nearly two decades earlier, Mary is thrilled to have a new case. In the last decade of the 19th century, it’s tough going for a woman detective.

Mary, however, has no idea what she’s getting herself into. Before long, she’s run afoul of some of the richest and most powerful men in Brooklyn and New York City, and the bodies start to pile up. Her investigations also seem to have endangered herself and her loved ones. It’s not at all clear what the connections are, if any, among the various acts of violence touching Mary’s investigation and life.

This is the second Mary Handley book by Lawrence H. Levy, a successful writer for film and TV. Brooklyn on Fire makes references to Mary’s detecting debut, but it’s not necessary to have read Second Street Station, the first in the series, to enjoy this book.

And the book is enjoyable, for the most part. Somewhat in the vein of Susan Elia MacNeal’s Maggie Hope novels, the Mary Handley books mix fictitious characters into historical events, using a lot of real, famous figures. In this case, an important element is the proposed merger of Brooklyn and New York, with all the accompanying power plays and players. Mary’s investigations have her running up against Andrew Carnegie, John D. Rockefeller and the Vanderbilts. Reading about these people, and, with Mary, having tea or dinner with them, is fun.

Mary even has a serious romance with George Vanderbilt, and she travels with him to see the construction underway at Biltmore House in Asheville, N.C.

The mystery is well plotted, with enough twists and red herrings to keep readers guessing, plus some suspenseful moments.

The book is good, but not great. The character of Mary strains credulity at times – she’s awfully self-sufficient for an 1890s Irish girl in Brooklyn, and her stiffness and obstinacy can be a bit tiresome. Still, there’s plenty to like about her, and the book does demonstrate the sort of obstacles ambitious women of her era (and later ones) faced.

Levy works in ample historical detail and information, but he falters at times, as when he referred to Mary as a “media darling,” an odd term for an era when the press was the only real news medium.

The story also strains credulity in some respects, including Mary’s whirlwind romance with George Vanderbilt. Mary Handley, however, was a real person, and it is true that she helped the Brooklyn Police Department investigate a sensational case involving Thomas Edison, among others. Levy has said in interviews that he knows little about the personality of the real Mary Handley, so he created her as he would like her to have been.

I suspect that we’ll be seeing Mary Handley in more books, and quite possibly on a screen of one size or other. I’ll be happy to follow this smart, spunky young lady on another adventure in the 1890s.

My enjoyment of this book was enhanced by listening to the audio version read by Cassandra Campbell, one of the best audio book readers at work today.