The death of the republic

A new semester of commuting to the journalism school at Chapel Hill provides new opportunities to listen to outstanding audio books. 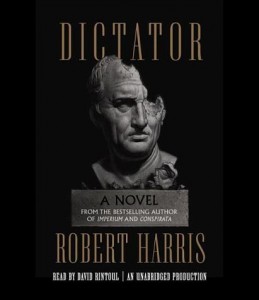 Cicero comes down to us through history books and popular culture as the greatest Roman orator, the man who gave us such aphorisms as “While there’s life, there’s hope.”

He was, indeed a great orator, whose words could stir crowds or Roman senators to action, and whose witticisms sometimes got him into trouble. And there was much, much more to the man and his life, as Robert Harris ably shows us in Dictator, the third in his trilogy of historically based novels about the life of Cicero.

Deftly working in the vast amount of historical information available about this period (Cicero lived from 107 to 43 B.C.) as well as some of Cicero’s recorded speeches and writings, Harris brings the story vividly to life through its narrator, Tiro. A slave whom Cicero eventually freed, Tiro worked closely with his master and friend, helping him with his extensive writings and developing a form of shorthand that enabled him to make accurate reports to Cicero about relevant events and conversations. The real-life Tiro wrote a biography of Cicero, which has not survived. That biography was likely more formal and less personal than the account Harris gives us, but it could not have been any more fascinating.

Dictator begins as Cicero, 48 years old, is fleeing Rome, heading into exile a few steps ahead of Clodios, an old enemy whom Julius Caesar has encouraged to persecute him. Cicero’s offense had been to oppose the creation of the triumvirate of Caesar and the two other most powerful Romans, Pompey the great and Marcus Crassus, to rule the Republic. It ends 15 years later with the gory assassination of Cicero after the boy Octavian (who becomes Augustus Caesar) had betrayed Cicero joined forces with Mark Antony and Lepidus, and ordered the execution of Cicero and hundreds of others.

Those 15 years are filled with civil wars, assassinations, political intrigue, personal crises and enough action and suspense to keep any reader riveted. For those of us who read Shakespeare’s Julius Caesar in high school, and have forgotten most of what we learned in school about the Roman Empire, this novel is a fine history lesson.

But seen through the eyes of Tiro, the life of Cicero and the gifted writing of Robert Harris, it also is a story as modern as today’s headlines. These are the years when the Roman Republic crumbled, giving way to dictatorship and empire. As Tiro’s loving yet honest portrait shows, Cicero was far from perfect. Sometimes fear overtook him, sometimes pride, and he made some poor decisions. Ultimately, though, he spoke out and took action to preserve important principles, chief among them liberty. He paid dearly for his principles.

Today’s political struggles in the United States are not as violent in the physical sense as those in the waning days of the Roman Republic – our attacks are more through the ubiquitous, instant media – but many of the same values are at stake, and this story gives us much to ponder. How much liberty can we sacrifice in the name of security, or power, or money? How far are we willing to go to “win” political battles, even if winning diminishes all that our democracy is supposed to stand for?

Dictator is the last book in a trilogy, but it is not at all necessary to have read the previous volumes. I listened to the audio version of this one, ably read by David Rintoul, a British actor. Harris writes mostly in contemporary English, with liberal doses of Latinisms, and Rintoul, of course, has an educated British accent, but once I (quickly) decided to think of the novel as a modern translation, I settled in and enjoyed the story.

Dictator is another example of one of the great values of audio books for some of us readers who are set in our literary ways: It’s unlikely that I would have picked up the print version of this book. If I read historical fiction, it’s usually books set in more recent times. But I was willing to listen to this book, and I’m certainly glad I did.