This year is the 100th anniversary of the start of World War I. I’ve long found the years during and after World War I particularly interesting. That’s been especially true for books set in England, where World War I profoundly changed so many things that British people had thought were constants in their world. I’ve enjoyed, for example, Charles Todd’s series starring Inspector Rutledge, a detective who suffers PTSD from his days as a World War I officer, and the more recent series with Bess Crawford, a battlefield nurse.

This new novel by April Smith gives intriguing insights into how the Great War affected Americans, even though we were in the fight a much shorter time than the Brits were. 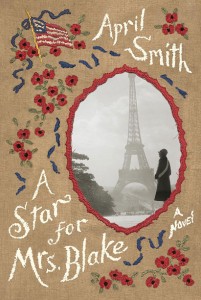 April Smith, who’s had considerable success with her novels about FBI Special Agent Ana Grey, puts her storytelling skills to good use in this moving novel about a chapter of American history that’s largely been forgotten – the Gold Star Mothers who traveled to Europe in the 1930s to visit the graves of their sons who were killed in World War I.

Americans were “over there” to help win “the war to end all wars” for only a little more than one year, but that was long enough for 116,516 Americans to be killed. More than 30,000 of those were buried in U.S. cemeteries in Europe.

During the 1920s, the Gold Star Mothers Association, made up of women who had lost their sons in the war, lobbied Congress to arrange pilgrimages for American mothers to visit their sons’ graves in Europe. Some mothers had made the sad journey on their own, but many lacked the resources to do so. In 1929, Congress passed legislation to organize and pay for the pilgrimages. From 1930 to 1933, the Army arranged the trips, escorting small groups of women to Paris and into the countryside to battlefields and cemeteries. This was during the Great Depression, but the thinking was that the well-publicized pilgrimages would help boost American morale.

All told, 6,693 mothers made the journey. Their average age was in their early to mid 60s. Many had hardly traveled beyond their hometowns before, much less to a foreign country. Getting these women where they needed to go and back home safely was a major undertaking.

April Smith drew on an actual diary written by a West Point graduate, Thomas Hammond, who, as a young lieutenant, had the job of liaison officer accompanying a group of Gold Star Mothers to France. She also based a character, more loosely, on an American sculptor named Anna Coleman Ladd, who used her artistic skills to make masks for some of the many World War I soldiers who suffered devastating facial injuries.

Smith does a masterful job of weaving this information into a story with characters who come wonderfully alive. She’s obviously done her homework, and she works the history into the novel gracefully, so that the historical facts become part of the story without weighing down the narrative.

This is the story of Cora Blake, a tough woman who lives on an island off the coast of Maine. That’s where she, a single, young mother, raised her only child, a son, Sammy, who lied about his age and joined the Army at 16. He became a marksman in France, and was killed by German machine guns in the waning days of the war. I defy anyone who’s a mother, and especially anyone who has a child in military service (not to mention a son named Sam who’s about to be deployed again, as I do), to read passages in which Cora thinks about Sammy without being moved to tears.

Cora is younger than most of the Gold Star Mothers, and she’s become active in the organization. She’s the volunteer “member coordinator” for one of the small groups setting sail for a pilgrimage to France. She also has been keeping company with a man back home, but she doesn’t know if she’s ready to move into a permanent relationship. Then, in France, she meets a former war correspondent who suffered terrible injuries to body and mind.

This novel is also the story of the other women in the group of five, each of whom has her own sorrows and her own challenges, despite their widely different backgrounds. Yet, despite the inherent sadness of their stories, A Star for Mrs. Blake has its lighter moments, and even healthy doses of humor. Ultimately, it’s uplifting, a story about terrible loss, true, but also about the enduring quality of love, and about how life does go on.