The questions that haunt us

Paul O’Connor reviews a historical novel that tells a good story while examining questions that are still with Americans today. 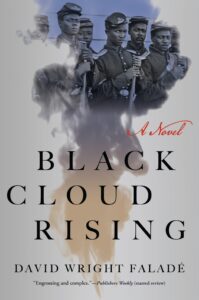 In late fall 1863, the Union Army’s African Brigade marched southward from its Fortress Freedom encampment near Portsmouth, Va., through the Great Dismal Swamp and into northeastern North Carolina. Under the command of a one-armed general determined to punish rebel irregulars, the brigade was also on a mission to liberate thousands of people still held in bondage.

Using this historical event as his setting, David Wright Falade’ has crafted an insightful novel that examines the meaning of freedom, human relations in a time of immense social change, and class stratification. It is the story of recently freed people trying to understand, and cope with, their new reality and of a white population refusing to accept it.

Richard Etheridge is a former slave, in his early twenties, who was raised on North Carolina’s Roanoke Island. His mother was a slave, his father her owner. His parentage gives him elevated status among the homestead’s slaves. His father shows him some preference, allowing his white daughter to teach him, her half-brother, to read and write while his father’s white nephew, who lives with the family, is Richard’s regular companion in childhood.

But when Union forces liberate Roanoke Island, Richard and many of his fellow male slaves join the U.S. Army and the African Brigade, much to the displeasure of his father, half-sister and cousin.

The brigade’s march involves ambushes, reprisals against bushwhacker homes and leaders, and a real skirmish or two, but Black Cloud Rising employs combat only to aid in its examination of the relationships between and among its many strong characters.

Among the black soldiers, there is friction based on previous station, with Richard being the obvious target. He is a sergeant, and a good soldier. He obeys orders from his white officers and expects his soldiers to do the same. Most do. But Revere, also a sergeant, and a man who has been rebellious since boyhood, boils with hostility toward whites and any black man who is less angry than he, namely Richard.

Others in the brigade do not understand their new status as freedmen, and what it means in their lives. They address their officers not as “sir,” but as “massah,” leaving the white officers uncomfortable and looking to Richard to teach his troops proper military address.

The troops hold a myriad of perspectives. One earnestly asks Richard what it means to be free; he has no concept of it. Others contemplate a return to Africa and debate it at night:  Should they go or should they stay? Are they Africans, or Americans, or something else?

The white officers are similarly clueless. Richard finds himself tutoring an earnest colonel on the proper approach to disciplining and addressing “colored troops,” approaches that differ because of history from those he would employ with white troops.

The book, however, revolves around Richard, his hopes, dreams, ambitions, regrets and past. He lives uncomfortably with the knowledge that he accepted the preferential treatment he received from his father and half-sister, worrying that in doing so he betrayed his mother, who despised the man who had impregnated her. Revere torments him for accepting the crumbs of respect thrown him by his father, and those taunts stay with Richard until the final page.

Black Cloud Rising is a prize of a read. It is wonderfully written and developed. The characters are vivid. The tension, as the mission nears its conclusion in late December, is as good as that in any spy thriller I’ve read lately.

Most important, Black Cloud Rising provides a new approach to discussing race, placing it in a piece of historical fiction that is highly relevant in a country that, even today, still has not answered the questions these characters pose.