Years ago, a review by Bob Moyer introduced me to the works of Walter Mosley. Since then, I have read many of Mosley’s outstanding  and evocative mysteries, including many  of the early ones I had missed.  Now I’ll have to add this book of stories to my reading list. 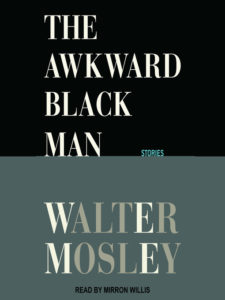 Men. Awkward Black men, plural, populate the pages of these 17 stories. Each one of them, mostly middle-aged, has a problem that complicates his life. The man with a “Pet Fly”  makes pathetic attempts at courting that get him charged with harassment. In therapy for 31 years, the writer in “Cut Cut Cut” just feels “stuck.”   “Leading From the Affair” his wife had, a husband finds himself ”on a flat plane of insurance claims” and searches for a way out.

These stories roll across the pages with the trademark Walter Mosley rhythms. The man knows how to turn a phrase, tap into the vernacular. The overweight young man who sits down next to the “The Black Woman in the Chinese Hat” has by the end of the day found “…the intimacy and the closeness I had always wanted but never suspected until that day.”  A fellow employee tells the same character in another story, “…man forget he’s black for you could say Jackie Robinson.” None of these phrases ask us to stop and appreciate them; they only serve to sharpen the details of each story’s mise en scene.

And that’s where Mosley flaunts his mastery. In every story, a shift that surprises both the Black man and the reader emerges. Both of his psychiatrists dismiss the man who was “stuck,” he loses his job, but he ends up starting a magazine so successful that “The anxiety this notoriety produces is sublime, and at the same time, almost unbearable.”  The bank teller who has never made a mistake in thousands of transactions but never advanced, attracts the offer of a lifetime when he blows off the one job interview he tries. Every denouement ranges from satisfying to phenomenal. To reveal any more scenarios would detract from the pleasure of these pieces.

Mosley has frequently been called America’s best Black mystery writer. Indeed, every story here in some way throws light on the Black man’s plight in America. But being stuck, socially inept, trapped in a job — Mosley’s stories reflect the human condition. He is much more than a Black mystery writer.  He is flat out one of America’s best writers, and this book shows his hand at the short version of his art.