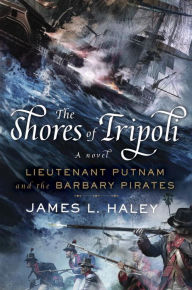 Wow, what a book – a naval adventure tale full of action, interesting characters and fascinating history. The Shores of Tripoli is a highly entertaining and enlightening beginning to what I hope will be a long series of novels.

Our hero is Bliven Putnam, a New England farm boy who is thoughtful, well read and eager to see the world. With misgivings, his father lets him join the fledgling United States Navy when Bliven is 14. It’s not long before the boy is educated in the ways of the sea and toughened in battle. He becomes a midshipman and moves on to lieutenant while still a teenager. One of the many details that you will learn from this well researched book is that service at such a tender age was not unusual in the early days of our country’s Navy. Bliven was a midshipman decades before there was a Naval Academy (or, later, ROTC programs) to educate and train future Navy and Marine officers.

The book starts in 1801, when the American Navy is still in its infancy and politicians argue over the wisdom of spending the money to build and maintain ships and keep them manned with trained crews.

President Jefferson, however, has decided that the young country must do something to stop the menace of piracy in the Mediterranean, where the Berber States of Northern Africa believe that their religion entitles them to seize foreign ships and make slaves of the “infidels” who make up their crews. The Berber States, especially Tripoli, demand tribute to leave U.S. ships alone and ransom to free those sailors who are captured and enslaved.

While on his first ship, Bliven is part of a fierce battle with the pirate ship Tripoli. After an extended time at home, he is assigned to the USS Constitution, under the command of Commodore Edward Preble. In addition to the action he sees on the Constitution, Bliven is temporarily assigned to accompany Army Gen. William Eaton on a daring march through the desert to mount a surprise attack on the Libyan city of Derna. Students of history will know Bliven is in the thick of actual events with real people.

James L. Haley must have done extensive research into the history of the Navy, the United States and early 19th century wars and politics, and, like the best historical novelists, he works his knowledge smoothly into the story he’s telling.

Bliven sees a lot more of the world than he had imagined, learning much about human nature, politics, military culture and, yes, women. In 1801, he’s a bright but naïve young teenager; by the end of the book, he’s a man, even if not yet in his 20s.

Haley does a grand job of bringing the story alive. With Bliven, we brave the seas, face terrifying foes, visit exotic places and meet interesting people.

Although fans of historical fiction in general should love the book, those with an interest in naval history will be especially pleased. Those familiar with today’s Navy will be intrigued, amused and even horrified by some of what went on in those early days. One challenge, for example, involved trying to figure out how to keep worms from infesting the hard bread that kept sailors alive on long stretches at sea. Another was the lash, which some officers were all too ready to wield for any infraction.

If you like Patrick O’Brian’s Aubrey-Maturin (Master and Commander) nautical novels, you should love Haley’s book. It’s set at about the same time, but from the perspective of the U.S., not the British Navy. And you, like Bliven, will pick up on the reality that tensions between the United States and Britain may well lead to war before too long. Bliven, too, is increasingly conscious of tensions within his own country between people from the North and those from the South, between those who believe slavery should be abolished and those who think it must be continued.

The U.S. Navy, we know, will have many more vital and adventurous missions in the years immediately following 1805. I’ll be surprised and disappointed if Bliven Putnam is not in the thick of them.