So you thought you knew the Lindbergh story

Redemption is sweet. For three years, I’ve had a novel by Melanie Benjamin on my office worktable and on my conscience. 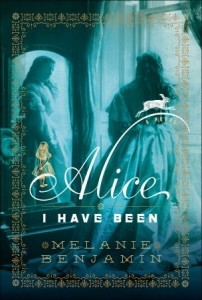 I loved her book Alice I Have Been, about the real Alice whom Charles Dodgson (aka Lewis Carroll) wrote about in Alice’s Adventures in Wonderland.  But I read it at an in-between time in my book-reviewing life, during the transition when the Winston-Salem Journal stopped running locally written reviews of books for adults, and I was just getting this blog up and running. So the book slipped through the cracks, and I never reviewed it.

Now, however, I’ve just finished Benjamin’s latest historical novel, so I have a natural opportunity when reviewing The Aviator’s Wife to praise the previous book as well.

In Alice I Have Been, Benjamin deftly weaves a fascinating story drawing on the considerable information that is known about Alice Liddell and Charles Dodgson. She deals with, among other things, the idea that Dodgson’s obsession with young girls was far from healthy. At the very least, the real Alice’s family misunderstood the relationship, and their belated attempts to deal with it contributed to problems Alice dealt with most of her life.

This is the well-told, well-imagined story of a real girl who had to grow up, who could not live forever in a magical Wonderland. And her real world, as Victorian England with all its supposed absolutes gave way to the uncertainties of war and its aftermath, was often trying. It was a world that many women of spirit and intelligence found difficult to navigate, and Alice, who struggled with the clash of fiction and reality most of her life, found the going especially tough.

Benjamin followed her Alice novel with another historical novel based on a real person, The Autobiography of Mrs. Tom Thumb. That book never made its way into my reviewing stack, so I have no guilt associated with it. Having now read Benjamin’s two other historical novels, however, I’ll have to track that one down. 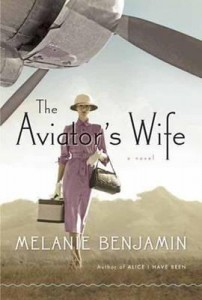 The Lindbergh story is a part of our American culture. We’ve read about the young aviator’s solo flight across the Atlantic, maybe even seen the old movie about it, starring Jimmy Stewart. We’ve seen the remarkably small, fragile looking plane hanging in the Smithsonian in Washington.

We know the Lindbergh’s baby was kidnapped and found dead, and that there was a trial and an execution. We’ve heard about Anne Morrow Lindbergh’s book Gift From the Sea, even if we haven’t actually read it.

We probably also know, at least vaguely, that Charles Lindbergh associated with Hitler before World War II, opposed American entry into the war and maybe even was a Nazi sympathizer.

And we may remember stories from more recent years about Lindbergh’s infidelities later in his marriage and reports of his illegitimate children in Germany.

From those basic outlines of the Lindbergh story, with extensive research into the writings of both Charles and Anne Lindbergh, biographies and other historical documents, Melanie Benjamin has crafted a fascinating novel about an iconic marriage and, especially, the woman who fell in love with the nation’s hero.

There is so much in this book: The story is rich with romance, adventure and tragedy. And, as she tells the story in Anne’s voice, Benjamin also offers fascinating insights into a 20th-century woman’s struggles to sort through life’s claims on her. She was the ambassador’s daughter, the hero’s wife, the aviator’s “crew” and the dead baby’s bereaved mother. She also was the woman who, more often than not alone, raised five lively children. And, as she long thought of herself and eventually became, she was a writer.

Who, in the midst of all these roles, all these demands, was Anne Morrow Lindbergh, and what was really important to her? The reader watches, sympathetically, as Anne slowly becomes aware of these questions and, eventually, the answers to them.

Anne Morrow was a shy college girl, feeling inferior to her pretty older sister, when the young hero took notice of her.  She longed for a hero who would whisk her away into his dramatic life. She got what she wished for and much more. Charles was enigmatic, moody and demanding, expecting her to be his student and flying partner as well as what he considered an appropriate mother for his children.  He was driven, a hero pursuing missions, rarely able to relax and be simply a man, a husband, a father.

And from the moment their engagement was announced, the couple had to deal with suffocatingly adoring crowds and a dangerously determined press corps. Privacy was next to impossible; Charles always blamed the press, which revealed the location of their home, for the baby’s kidnapping. They were America’s version of royalty, and they paid the price of fame much as Princess Diana later did in England.

In this, her third historical novel, Benjamin does another fine job of turning a historical figure into a living, breathing woman with hopes, disappointments and emotions.  She says in an author’s note that she’s gratified when readers are inspired by her fictions to delve more deeply into the historical records, and she offers a list of her sources. While she’s stayed as close to the “truth” of history as a good novel allows, Benjamin is offering another sort of truth that’s better understood through fiction, the kind that’s kept in the heart.

3 Responses to So you thought you knew the Lindbergh story