The casualties in industry’s assault on science

The book Denis DuBay reviews here was published in 2008, but it is, unfortunately, just as relevant today as it was then.

DOUBT IS THEIR PRODUCT: HOW INDUSTRY’S ASSAULT ON SCIENCE THREATENS YOUR HEALTH. By David Michaels. Oxford University Press, 2008.  384 pages. $29.95. 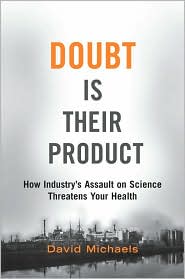 Once upon a time, seemingly in another galaxy far away, scientists received nearly universal respect for their knowledge and skills, at least in their chosen field.  How rapidly things can change.  Witness now a leading climate scientist receiving a subpoena from a state attorney general angry with his findings and being compared to a child molester by a national magazine, and other climate scientists harassed for simply doing their job.

David Michaels, a former chief safety officer for the nation’s nuclear weapon’s facilities under the Clinton administration, helps make some sense of this unbelievable turnabout in his 2008 book, Doubt Is Their Product.  The title of the book came from the blunt statement of a cigarette executive: “Doubt is our product since it is the best means of competing with the ‘body of fact’ that exists in the minds of the general public.”

In the case of the tobacco industry, that body of fact considered cigarette smoke to cause lung cancer and heart disease.  The longer industry leaders could create at least the semblance of controversy about the hazards of tobacco, the more money they could make selling tobacco.  Here industry learned that “debating science is much easier and more effective than debating the policy.”

And the science is epidemiology, defined by Encarta World English Dictionary as “… the scientific and medical study of the causes and transmission of disease within a population.” Here is an entire field of science that arose in part because one cannot ethically conduct an experiment to test whether a substance causes cancer on real live human beings.  A gross oversimplification, but you get the idea.

In order to determine whether certain substances or practices do harm humans, scientists must either do the experiments on biologically similar animals, or conduct elaborate correlational studies that need to control for the host of extraneous variables such as age, gender and occupation that can confound any results.  Either of these two alternatives, but especially the latter one, often involves elaborate employment of, oh my, statistics.

In Chapter 6, Tricks of the Trade: How Mercenary Scientists Mislead You, Michaels describes all the ways a so-called “product defense scientist” can use the complexities of epidemiology to deceive.  A favorite technique finds the affected industry kicking into high gear when a new study comes out with unfavorable results.  The industry demands the raw data from the study, then sets its hired guns to work reanalyzing that data.  With a little massaging here and cherry-picking there to “improve” the study, voila, the unfavorable results turn out to be a mirage.  Product goldfinger is safe after all.  Of course it is.

The “product defense industry” takes its orders, and more important, its money, from companies and industries with products to sell.  Its objective, as it appeared in a 1972 letter from a Tobacco Institute staffer, “…creating doubt about the health charge without actually denying it.”  Industry does not have to win the science debate to win the policy debate.  It only has to generate a bit of confusion surrounding the science.

We see Michaels’ passion for this story beginning on page ix when he describes an especially offensive example of the model created by Big Tobacco.

In 1980, 555 cases of Reye’s syndrome were reported, and one in three children diagnosed died.  Today, thanks to a public education campaign and warning labels, nearly everyone is aware that children with a flu-like illness should not take aspirin because it increases their risk of developing Reye’s syndrome.  But in 1980, few knew about the link.

Faced with convincing evidence, aspirin manufacturers nevertheless delayed action alerting parents to the situation for several years, claiming flaws in studies, and asserting that: “We do know that no medication has been proven to cause Reye’s.”  Michaels points out that the italicized emphasis appeared in industry’s original public service announcement!

And those italics are telling.  Contrary to popular public understanding, science rarely is able to say it has “proven” something beyond the shadow of a doubt.  Michaels describes the resulting delays to regulatory action as waiting for the body count before exercising precautions, the “bodies in the morgue” form of risk assessment.

In the case of aspirin and Reye’s syndrome, it was 1986 before a lawsuit forced the Reagan Administration to act.  As a result of the education campaign and warning labels, there are few Reye’s syndrome cases today, but no one knows how many children died in the early 1980s as a result of the doubt manufactured by an industry eager to make more money selling more aspirin.

Michaels tells many tales of doubt manufactured on behalf of dangerous products whose industries followed the lead of Big Tobacco, including benzene, asbestos, lead, mercury, aromatic amines, diacetyl, beryllium, vinyl chloride, and among others, the drugs phenylpropanolamine (PPA), and Vioxx.

The value to industry of creating doubt resides in the common misperception that absolute and direct proof is the gold standard in science.  In fact, science proceeds based on the weight of the available evidence.  When that weight is balanced between two opposing viewpoints, further study is required.  However, when the preponderance of the evidence comes down on one side of the argument, science accepts the conclusion and moves ahead.  Further data will likely strengthen the case, and perhaps modify it slightly, but will not often overturn it.

Reading that someone demands “proof” of a connection between a product and potential danger should set off alarms that here stirs a product defense advocate wishing to sow confusion and inject delay into the regulatory process.

And if that industry reanalysis is criticized for not appearing in a peer-reviewed scientific journal, no problem, the product defense industry has “captured” journals ready to provide that peer-review imprimatur!  Michaels suggests viewing with some caution articles found in certain publications, for example, Regulatory Toxicology and Pharmacology, Indoor and Built Environment, and the Journal of Occupational and Environmental Medicine.

What can be done about these illegitimate tactics that threaten public and environmental health?  Michaels suggests keeping an eye on the “funding effect.”  Follow the money, discover who paid for the research, and you can predict the results with amazing accuracy.

So what of the relative lack of respect accorded to scientists today, especially those on the front lines of well-known issues such as climate change?  How might David Michaels’ book explain this?  Consider that for over three decades the public has been treated to special interests trotting out their captured scientists every time a bottom line is threatened.  Of course one’s view of the objectivity of scientists, and even of science as a way of knowing, would tarnish.