History and mystery, a royal novel

Anne Barnhill, a novelist of the Tudor era, takes a look at a new work from a prominent British historian who has successfully ventured into historical fiction in recent years. 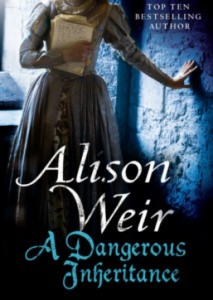 In her fourth historical novel, renowned historian Alison Weir brings together the stories of Katherine Plantagenet, the base-born daughter of the notorious Richard III, and Katherine Grey, Lady Jane Grey’s sister. Told from alternating points of view and separated by about 50 years, the lives of these distant relatives seem to echo one another.  Each carries royal blood, and each falls in love with a man who is forbidden to her. When Katherine Grey is exploring the ancient wing of her new husband’s (Henry, Lord Herbert) house, she discovers a painting of a beautiful young girl, a painting that haunts her.  She wonders about this young girl and why she looks so sad.

Of course, the girl is Katherine Plantagenet. Kate, as she is called, is the pampered daughter of Richard III and she sees her father in the best possible light. When she and her stepmother, Anne Neville, travel to London for Richard’s coronation, Kate begins to hear ugly rumors about her father, rumors she refuses to believe.  It is bruited about that Richard murdered Henry VI under orders of his brother, King Edward IV. And then, she hears her father has done away with the Princes in the Tower, her own cousins.  She cannot believe the father she loves could be capable of such a brutal act.

As the lives of these women continue to intersect, Katherine Grey becomes embroiled in the mystery of the young princes. While she is imprisoned by her cousin, Elizabeth I, for marrying without permission, she is able to gather more information, befriending her sympathetic jailor and stimulating his own interest in the supposed murders.  As both women deal with their fates and their ill-starred romances, it becomes evident that having royal blood is not necessarily an advantage.

Weir does an excellent job setting the scene; we are squarely in the Tudor period and the details are delightful.  Here is an example:

My room is beautiful, lavish!  The tester bed is carved, gilded, and built on a dais.  The curtains are of rich red damask looped with gold tassels, the counterpane of costly cloth of gold, with lozenges embroidered with the lions of Pembroke on a background of red and blue velvet.  Over a chair is draped the most exquisite nightgown of crimson satin edged with pearls.

A bowl of dried petals gives off a fragrant scent.

Though the story is richly told, the continuing shifts in point of view interrupt the flow, often halting the narrative of one woman just as the story begins to engage the reader.  There is also some confusion as to which woman’s story is taking place, due partly to their sharing a name but also to a lack of differentiation between the two women.  However, these are minor flaws; overall, the book is an exciting foray into a mystery that has stumped historians for years: What happened to the Princes in the Tower?