Want a book about travel, French food and wine, romance – and, oh yes, a good police mystery? Our world-traveling reviewer, Bob Moyer, has just the story for you. 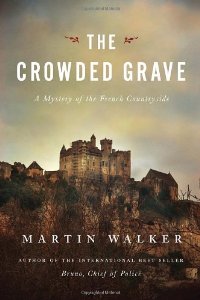 Bruno, chief of police in the small French village of St. Denis, has a lot on his plate.  A corpse only 20-some years dead has been found in an archeological dig next to a 30,000-year-old set of bones, making for The Crowded Grave of the title. Besides that, animal activists have started protesting at a nearby foie gras farm, the new magistrate has taken issue with Bruno’s tactics, and he has been assigned security for an anti-terrorist conference nearby. So what does Bruno have on his mind?

Dinner, of course. These books are well-plotted but thinly disguised paeans to life in the Perigord region of France, and Bruno is not your normal police chief.  He is “…an ex-soldier who hunted and drank and who tried never to arrest anyone and cared little for the subtleties of modern law enforcement with its counseling and political correctness.”  He also sees himself as protector of the provincial traditions of his small adopted town, someone who struggles to maintain connection with the past while moving forward.

Of course, what could be more important than food, wine, and romance – a meal with a former lover reassigned to the region for the anti-terrorist conference? He has already prepared one meal for her – culinary foreplay, if you will- and now he prepares for the climactic event. Walker lavishes 11 mouthwatering pages on the preparation and execution of the meal (who can read the phrase “… crayfish atop a broth of celery and fennel, onions and carrots” without licking his lips), but only one tasteful paragraph on the foregone conclusion in Bruno’s boudoir.  (Bruno fans should be drooling in anticipation by now.) The meal is just one of many repasts the reader can revel in throughout the narrative.

Meanwhile, Walker cooks up quite a stew of a story. He stirs into the mélange of main ingredients – the dead body, a kidnapped archeologist, a bomb at the foie gras farm –bits of the past always present in the Perigord. Bruno notes at one point in his patrolling that “…France is built on a heap of bones … we are the sum of all the dead that went before us.”

Walker seasons it with a soupcon of Spanish Basque history, a few sprinkles of local culture, a dash of romantic intrigue, then finishes it all off with a dramatic flambé of violence.  Like the many wines that flow through these pages, this series improves as it ages.  Bon appetit, mes amis.

This entry was posted in Mysteries and tagged Bruno, Martin Walker, Mystery, Perigord. Bookmark the permalink.