Fittingly, Bob Moyer has sent from Germany a review of a mystery dealing with wartime Germany. Will Bob keep traveling the world, sending reviews to match his locales? Or will he return to North Carolina and join the rest of us in armchair journeys? Stay tuned. Meanwhile, enjoy this review. 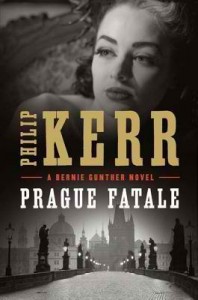 A hard-bitten cop in a big city – disgusted with his job, disdainful of his superiors, disillusioned with his life – is not uncommon.  Berlin’s Bernie Gunther is just such a cop, the one his superiors hate to see coming but have to use, since he’s so good. He chases down one drink after another, and chases after women with tails “…that seemed to have a whole life” of their own.

Dropping a cop like Bernie into a closed-room murder in a castle is a little more uncommon. His boss orders him to attend a weekend retreat, at which someone is murdered. His boss then orders Bernie to solve the mystery, and everyone to remain in the castle until he does. It’s a case that smacks more of Christie than Chandler.

What’s really uncommon, however, is the cast of characters and the setting of this story – 1942 German-occupied Prague, and a cadre of infamous Nazi officials. Philip Kerr has constructed a fictional murder case in a riveting historical context.  Reichsprotector Reinhard Heydrich, head of the SS, has taken a shine to Bernie – he’s tough, can’t be intimidated, and can’t be stopped once he’s set on the trail of a murder. Heydrich is comfortable enough in his power to put up with Bernie’s obvious disdain; he orders everyone to comply with Bernie’s questions, and even submits himself. Bernie’s investigation serves as the narrative device that reveals not only the murderer, but also this cast of murderers’ personal traits. Bernie has just returned from the Russian front where he saw the policies of this odious crew put into deadly practice; his interrogations constantly contrast their pettiness with the profundity of their evil. Every now and then, Kerr gives the reader a jolt by dropping the post-war fates of these men into the narrative, to chilling effect.

Meanwhile, Bernie must put together a conclusion out of disparate clues, which include a dead Berlin railway worker, matching knife wounds on another body, a hatcheck girl and an Agatha Christie novel. As his investigation transpires, he uncovers not only the murderer but also the spy Heydrich was looking for.  Of course, the truth brings dire consequences for Bernie and anyone close to him.

As he recounts this tale, he finds little solace in his survival and the post-war demise of most of the suspects in this case.

Meticulous research and an intriguing if derivative plot (it’s meant to be that way) mark this addition to the series featuring Bernie Gunther. Besides being suffused with the ghastly irony of a single murder being pursued while millions are dying at the hands of these functionaries, the book leaves a tangible taste of life under the Nazi regime.  Without soap, for instance, “…even the prettiest girl smelled like a stevedore.”  When stopping for a paper and a sausage sandwich, Bernie “…finds even less of interest in the sandwich than in the paper.”  And, of course, the abiding fear in the population.  When the hatcheck girl finds out he’s a cop, she sits stunned, “…as if a doctor had told her she had six months to live.”  The author has successfully woven fact and fiction into an uncommonly good story, which lingers long after the book is finished.