When I was in school, my history classes rarely made it beyond the first few years of the 20th century. I learned about the Great Depression, World War II and the other formative events of my parents’ generation mostly by hearing their conversations and stories. Maybe that’s why I’m fascinated by recent historical fiction that brings those years to life. Earlier this year, I listened with pleasure to Alex George’s novel A Good American, which starts with a young German couple arriving in the United States in 1904 and follows their family saga into the 21st century.

Now I’ve spent another few delightful days listening to a novel about a woman who chaperoned a future movie star to New York City in 1922. The author moves backward and forward in time, showing us what set up this adventure and what transpired in the decades that followed, giving vivid pictures of American life in the process. 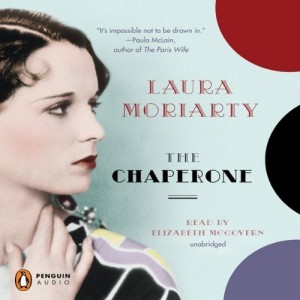 It’s 1922, and Cora Carlisle, a 36-year-old wife and mother from Wichita, Kan., is having a summer like no other. She has agreed to chaperone Louise Brooks, a beautiful, unconventional and headstrong 15-year-old from Wichita, while Louise studies with an elite dance troupe.

As the story unfolds, we learn the reasons why Cora is eager to leave the comfort of her home to put up with this brilliant but difficult girl who clearly resents having her around. Although most people don’t know it, Cora has been to New York city before: She left there when she was a small child, sent from a Catholic institution on an orphan train that took children west to find new homes.

To her lady friends in Wichita, Cora may seem to have the perfect life. She’s married to a handsome, charming, well-to-do lawyer who is quite a bit older than she. Their twin sons, having just graduated from high school, are spending the summer on a farm before heading to college. She’s well-dressed, well-spoken, well-connected and the picture of respectability.

But one of the insights this engaging story provides is that pictures – appearances – are not always, maybe not often, what they seem. Through Cora’s memories and reflections, we learn of her difficult early years. We meet the only family she can recall, a Kansas couple who took her in. And we understand why she wants to know more about the mother who gave her life, only to leave her in a home for “friendless girls.” We learn, too, about the compromises involved in Cora’s marriage.

The five weeks they spend together in New York prove pivotal for both Cora and Louise. Cora does find some answers, but they are not the answers she expected. In the process, she begins to realize that she hasn’t even been asking the right questions.

Cora and Louise learn a lot about one another, and Cora, at least, learns a great deal about herself. For Louise, introspection and awareness will have to wait.

Cora’s life is profoundly altered by the revelations and experiences of the summer. She returns to Wichita as a much different person. Her life has changed, and so have her values.

Louise will go on to become a famous, sometimes scandalous movie star with a long road to travel before she ever returns to Wichita.

Laura Moriarty deftly spins this story out against the backdrop of 20th-century America: Prohibition, race relations, the Great Depression and the Dust Bowl, World War II. In many ways, Cora’s personal growth and liberation parallel the changing mores and values of the greater society.

This is a highly entertaining story, read with great skill by the noted actress Elizabeth McGovern. The plot is enlivened with surprising yet perfectly plausible twists and turns. With Cora, we learn a great deal about what matters in life, and how it often bears little resemblance to what many people are absolutely sure is important.