Spies, air raids, Churchill – and a young lady who can handle them all

I like fiction that deals with fairly recent history and sometimes includes real people. Maybe that’s because most of the history courses I had in school stopped at about the beginning of the 20th century, so fiction grounded in fact helps to fill in the gaps. Maybe it’s because the links between what happened in the early years of that century and what’s happening in the early years of this one are so fascinating. For whatever reason, I love books such as Charles Todd’s novels of World War I and the years just after it. I also enjoyed the novels that Elliot Roosevelt wrote featuring his parents, Franklin and Eleanor. So I was intrigued when I saw that Susan Elia MacNeal has started a series of mystery/thrillers set in London the early days of World War II. 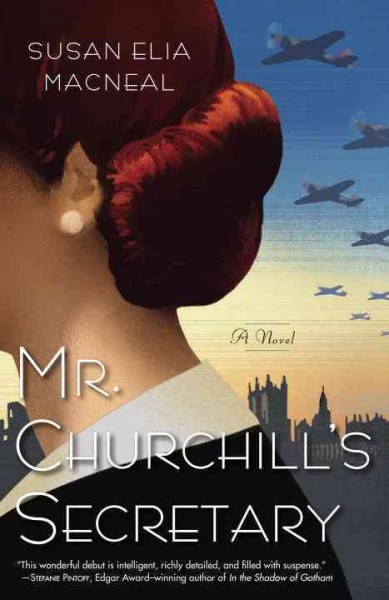 Though she’s British by birth and citizenship, Maggie Hope has been raised in the United States by her aunt, a professor at Wellesley, where Maggie herself studied. She’s a modern young woman, a gifted mathematician.  She travels to London to sell her late grandmother’s house, but changes her plans when Britain declares war. A friend from college days had been working at the U.S. Embassy but quit when Ambassador Joseph Kennedy was quoted in the British press making pro-Nazi comments. Maggie stays and takes in her friend and a few other young women as housemates.

Turned down for a higher-level post that would use her math skills in favor of a man, Maggie grudgingly accepts a job as a secretary – typist, really – in Prime Minister Winston Churchill’s office.

The secretarial job gets her into the thick of things in the War Rooms at No. 10 Downing Street. Her continued presence in England gets her interested in learning more about her parents, whom she’s been told died in a car crash when she was very young. And something – her position? her family ties? – gets her into the midst of wartime intrigue and a dangerous plot.

Maggie’s an engaging young woman, smart, spunky and principled. Because of perseverance and determination, she is eventually able to use her code-breaking talents in an important way.

London in 1940 is a dangerous and exciting place to be, especially if you’re close to the prime minister and friends with other young people engaged in work supporting the war. There are air raids and bombings at train stations. It’s hard to know sometimes whether which enemy is at work – Nazi sympathizers, or Irish dissidents.

Susan Elia MacNeal has done her research and uses her knowledge deftly. The story is rich with details and personalities of the era. Readers admire the determination of the Londoners to soldier on despite constant peril.

The plot charges along toward a suitably exciting climax, with enough interesting twists and turns to keep readers guessing.

MacNeal has done a fine job with her Maggie Hope series debut. I’m looking forward to seeing what perils and opportunities Maggie encounters next.