Bob Moyer has been reading Walter Mosley’s novels forever. He’s a fan of the Easy Rawlins series, which supposedly ended a few years ago but now, reports say, is being revived.

Leonid McGill is Mosley’s new protagonist. Bob read the fourth entry in the series, and I listened to it as an audio book. It was my first experience “reading” any of Mosley’s books, so I’ll let Bob take the lead on our dual review. 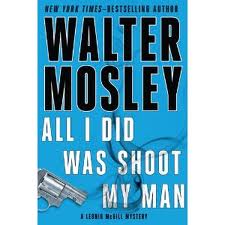 Short, stocky, balding, not to mention black, Leonid McGill doesn’t impress as a protagonist.  His punch belies his looks, however.  Brought up on the streets, he bought into a life of crime as a handyman for the mob, becoming a con man, a thief, a killer, and a fixer, among others.  Along the way, he also took on roles as a husband, a father, a lover, and a friend to some of the most outrageous characters you’ll meet in a Manhattan mystery novel.  The crowning achievement in his life of crime, however, was special:  “I was Typhoid Mary’s meaner older brother, the ire of Moses on the unsuspecting peasants of the Nile Valley. I planted false evidence, sicced the dogs on unsuspecting citizens simply because I didn’t like them and was being paid to trap someone, anyone, that would fit the bill. I was a minor, mischievous deity loosed upon naïve humanity for the entertainment of the gods.”

The story here begins as Leonid meets Zella, one of the 108 poor souls he framed, at the bus station.  As she says, ALL I DID WAS SHOOT MY MAN, but Leonid saw to it that she took a fall for a major heist of a lot of money.

He then saw the light some years back, and he has been trying to straighten out some of the lives he sent spinning out of control.  Unfortunately for him, his family and anyone involved with the heist and/or its cover-up, someone gets exercised about Zella’s release from prison.  Everyone’s endangered, including his family, and Leonid sets off on a literally feverish pace.

Mosley lets the plot follow the flow of Leonid’s life:  “Time on this earth for me was navigating the Problem River, making it from side to side, connecting contradictory concepts, struggling against the wind and current, the sun, and creatures, both great and small, but all deadly.”

Mosley’s winding narrative makes for an interesting journey, as Leonid travels from an upper East Side penthouse to Long Island bathroom and many points in between looking for answers – but a confusing one at times.  It’s hard to keep the players straight without a scorecard, like the woman who is secretary to the executive at the security firm trying to find the money who was the woman in bed with the man that Zella shot.

Leonid finally figures it out (so do we), but he’s left with one mystery that has trailed him from the very top of this series — what to do about his father. Tolstoy McGill walked out of his family’s life, but left his socialist teachings behind in a little boy’s mind. Those concepts still color Leonid’s outlook, and he doesn’t know if he wanted “…to kiss or kill my father; find or forget him.”  At the end of the book, all of us are left wondering if he will get the chance to do either. Only time, and the next installment, will tell.

Thanks, Bob, and now, my turn: 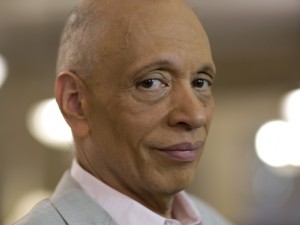 I almost did not make it through Disc 1 of All I Did Was Shoot My Man. I came to it cold, not having read the first three books in the series and thus not having developed a rapport with the decidedly odd protagonist, Leonid McGill. As I started listening to the story, I wondered if I would possibly come to like Leonid enough to care what happened to him. He admits that’s he’s spent much of his adult lifedoing some pretty despicable things that hurt other people, sometimes people who, if not strictly innocent, at least did not deserve what his perfidy got them into. And this is definitely not the sort of book I usually choose to read.

But I was driving, and I didn’t have another audio book handy, so I kept listening. And by the time Disc 1 was ejecting, I was ready for Disc 2. Leonid has a way of growing on you. He did, after all, eventually see the error of his ways, and now he has as well developed, realistic and stubborn a sense of right and wrong as anybody I’ve come across in recent fiction. He’s been a thug, but he’s an intelligent, thoughtful, educated thug. He also cares a lot about his unusual family. Only one of the three now mostly grown children who live in his home is his biologically; for years, his temperamental wife has sought out other men for reasons connected to her own demons. Yet Leonid loves all the children and does his best to be a good parent – good meaning preparing them for a tough world, among other things – and a good husband. Being a good husband does not necessarily mean abandoning the woman he actually loves, however.

I was glad to learn that Bob Moyer found the jumble of characters and the intricate plot a bit hard to follow. As I listened to the audio book, I sometimes got temporarily lost and wished I were reading the print version. Apparently, though, the print version presented the same problems, although I suppose it’s easier to thumb back through the pages than to try to find when a character was first introduced on some previous disc.

In any event, I learned that if I kept listening, I began to see the light, and the temporary confusion didn’t mar the overall story. Maybe Mosley was purposely trying to make his audience appreciate just what a tangled web nearly ensnared Leonid.

Mirron Willis did an excellent job of reading. The voice he gives Leonid is just quirky enough to suit such an uncommon character.

Now I do care what happens to Leonid, and I’ll be looking for the next installment in this uncommon series.