A North Carolina writer, Anne Clinard Barnhill, offers her first review for Briar Patch Books. Anne lives in Garner. Her first novel, At the Mercy of the Queen, is forthcoming from St. Martin’s Press.  Her previous books include At Home in the Land of Oz: Autism, My Sister and Me (memoir, Jessica Kingsley Publisher) and What You Long For (short-story collection, Main Street Rag). 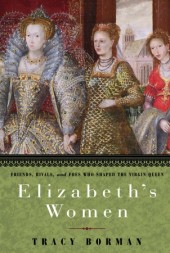 Tracy Borman’s third book, Elizabeth’s Women, is an intelligent, intriguing and insightful study of the women who influenced Queen Elizabeth I throughout her long life.  Meticulously researched and skillfully written, this look at how Elizabeth I became the woman who gave England its “Golden Age” is fascinating.

Borman begins with Anne Boleyn, Elizabeth’s ill-fated mother, and moves through Elizabeth’s succession of caregivers — Katherine Ashley, Blanche Parry, Lady Margaret Bryan. She looks at Elizabeth’s sister (later known as Bloody Mary) and her cousins, the Gray sisters and Mary, Queen of Scots, and at her ladies-in-waiting and her rivals. Searching through mounds of material, Borman gleans a good picture of the influences that helped shape Elizabeth.

One of the insights Borman brought to my mind was the influence of Queen Catherine Parr on the young Elizabeth.  Parr, Henry VIII’s last wife, was intelligent, well educated and a firm Protestant.  While Henry was fighting his final war in France, he left Queen Catherine regent in England.  Elizabeth was with the Queen during this time and would have seen a woman rule with dignity and competence, a strong model for the future.  Most writers have been obsessed with the strange behavior of Catherine Parr after the King’s death, quickly marrying the love of her life, Sir Thomas Seymour; this is the first time I’ve read of the powerful image of a queen actually ruling, a sight Elizabeth must have observed and admired.

As the story of Elizabeth’s reign continues, various rivals appear.  First and foremost, Mary, Queen of Scots, vies with Elizabeth as being one of the most sought-after brides in Europe.  Ten years younger than Elizabeth, Mary returns to Scotland after having been widowed.  Elizabeth is curious about this woman who is supposed to be able to charm the devil himself, and when Mary’s romantic escapades lose her the crown, Elizabeth is able to see, firsthand, what happens when  a woman allows love to rule her.

Another rival is Lettice Knollys, a maternal cousin of the Queen’s and the woman who steals away Lord Robert Dudley, Elizabeth’s one true love.  The “she-wolf,” as Elizabeth calls her, is a lady-in-waiting who didn’t.  For the rest of her life, Elizabeth is annoyed by this woman, and when her son, Essex, is beheaded for treason, Elizabeth shows her no mercy.

If I have a quibble with the book, it is the tendency of the author to make assumptions about the feelings and motivations of these historical figures.  Admittedly, Borman does most of this in the first two chapters, where she is summarizing the familiar story of Henry and Anne Boleyn:

Anne looked on in triumph as he (the King) lifted their daughter in his arms and proudly paraded her in front of the whole court.  The pride she felt in Elizabeth was matched only by the hope she felt for the child that was now growing inside her.

In truth, no one can know what Anne was feeling as Henry showed off his daughter.  After all, this is a nonfiction book, and we might imagine that is what she felt, but to declare it so, is, I think, inserting oneself too much. But this is a small quirk and primarily at the beginning of the book.

I heartily recommend this book to anyone interested in Queen Elizabeth and her Court.

This entry was posted in Historical Fiction. Bookmark the permalink.