Bob Moyer left from the Piedmont Triad International Airport in Greensboro, N.C., for a month in England and Germany a couple of hours after I left from the same airport on the same August day for a week in Italy. We were flying on different airlines, but before I left, I used my boarding pass to go through security and leave a book to review for him at his airline’s lounge. Then I went back out and went through security a second time to get to my departure gate.

This story is an example of how dedicated we are to providing you with book reviews on Briar Patch Books. (Or maybe it’s just an example of how crazy Bob and I are.) Anyway, this review is not of the book delivered at the airport, but that one will be forthcoming. Bob has been busy even during his travels. 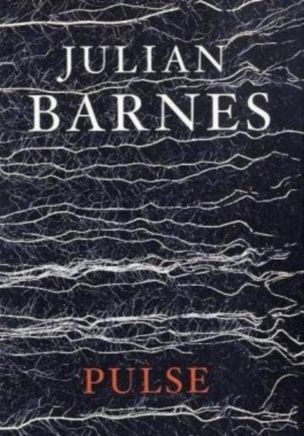 Although Julian Barnes is still with us – he just received his fourth nomination for the prestigious Man Booker Prize – he is constantly spoken of in terms that smack of his imminent demise.  “One of our greatest living writers” makes it sound as if he won’t be much longer, and how could anyone still alive have accomplished so much?  Indeed, his   accomplishments extend both far and wide – the aforementioned Booker nominations, a memoir, essays, a translation, novels with critical acclaim, and that accomplishment which puts him one-up on most of his contemporaries, popular acclaim, with at least three of his books hitting the best-seller lists.

His latest book, a collection of 14 stories, represents well the range of his renown. He takes us from the chitchattery of a contemporary London backyard barbecue to the elevated tones of an 18th century Germanic court; from the English seaside to the English moors; and from laughter in a Chinese restaurant to grief on a Scottish island. He takes us four times to parties At Phill And Joanna’s, where we hear only the dialogue in a contemporary setting. Barnes’ ear captures what seems to be a recording simply rendered here, revealing concerns, quirks and connections.  His accomplishment is almost too glib, the closest he comes to calling attention to his skills.

His narrative takes on an elevated tone that stops short of being arch in an unnamed court of the 18th century. There, a young doctor seeks to cure patients with Harmony, achieved through magnetism and a bedside manner that smacks of modern psychology: `”What was actually happening was some collaboration or complicity between physician and patient, so that his presence and authority were permitting the patient to cure herself.”  Of course, the “herself” decides she doesn’t want to be cured, because the cure removes not only her affliction but also the musical skill that supports her and her family.

Post-modern as they are, most of these stories end not well for the protagonists, especially the men. They fare poorly, and learn little.  An East Wind blows no good for the real-estate agent who takes up with a waitress from the former Soviet bloc in a dreary seaside resort. He is taken aback when she takes affront that he enters her apartment and pries into her past without her permission.  She leaves town immediately. He is left wondering why; only the reader gets it.

Because he cannot curb his compulsion to Trespass, Geoff begins and ends his story with a failed relationship.  No fairy tale endings here:  “I thought we were going to get married.”

“That’s why we aren’t,” Cath had replied. With the lonely hiker having not a clue, Barnes makes it almost painful for the reader to feel his push as he plies the moors alone.

Without question, Barnes is at his best making poignant moments – well, poignant. The reader never sees him set the machinery in motion, only the emotion set off by his subtle machinations.  The best stories here resonate with grief and loss.  Agonizing over the loss not just of his lover but their Complicity, a man achingly outlines moments of joy and connection now seen in the light of “heartbreak.”  The word sits at the center of the story; the emotion lies under it. During their first visit to a small Scottish island, a couple comes across a local custom, Marriage Lines woven into a sweater capturing the ups and downs of a couple’s union.  The young couple smugly assume “…that for them there would be no downs – or at least, not like those of their parents, or of friends already making the usual stupid, predictable mistakes.”  Barnes then weaves their ups and downs into their subsequent visits, revealing through their engagement with the simple people and place their own “zigzags.” Out looking for razor clams with their host, the husband notes “Bit like marriage, isn’t it?”  When the host asks him what he means, he replies “Oh, waiting for something to pop out of the sand. Then it turns out either there’s nothing there, or something that cuts your hand open if you aren’t bloody careful.” Setting, character and diction throw light on the state of their marriage. The piece concludes at the end of the line, a last visit by the husband in hopes his grief would be assuaged, or at least “…hurried on its way a little, by going back to a place where they had been happy. But he was not in charge of grief. Grief was in charge of him.”

One thing is clear at the conclusion of these stories: Barnes is in charge of his considerable skills and talent.  Few writers can accomplish so much while showing us so little effort.  His work is mastery not to be missed.