From the days when a story was a story

Bob Moyer enjoys new stories from an old favorite author, who died in 2007. 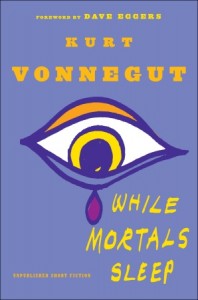 Maybe it’s because we miss him.  Maybe it’s because the editor put the best of these stories at the back of the book.  For whatever reason, these 16 previously unpublished stories by Kurt Vonnegut get more enjoyable as the book progresses. In this post-post-modern age of short stories where we can’t find a protagonist, and no epiphany shows up on the horizon, maybe we are just nostalgic for the kind of story Vonnegut wrote when he started writing.

These stories were crafted for such magazines as Collier’s and The Saturday Evening Post, mavens of middle-American literary taste before the phrase “middle America” was ever used. In his adulatory introduction, Dave Eggers defines the style as “mouse trap” stories: “A mousetrap story exists to trick or trap the reader. It moves the reader along, through the complex (but not too complex) machinery of the story, until the end, when the cage is sprung and the reader is trapped. And so in this kind of story, the character, the setting, the plot – they’re all more or less means to an end.”

That “end” usually was something of moral value:  “That being a decent person is an achievable and desirable thing. That faith has value.  That wealth solves few problems.” Even when Vonnegut was writing for publication, not posterity, he held his values out for all to see.

The Vonnegut voice and style are sprinkled throughout these stories as well. “Jenny,” the walking, talking refrigerator with the voice and features of her inventor’s ex-wife, foreshadows the author’s quasi-science fiction pieces. Judging a Christmas lights contest, a crusty newspaper editor learns something about the true value of Christmas “While Mortals Sleep.” The adverse effects of technology afflict the “Girl Pool,” where the secretaries of the Montezuma Forge and Foundry Company sit enslaved by their Dictaphones.  The “Tango” wreaks havoc on the libidos of a “Wasp” colony in New England. And a voice teacher secretly staves off a failed musical career by providing dough for doughnuts so the guy can make “$10,000.00 a Year, Easy.”

Not a page turns without a turn of phrase reminding us of the Vonnegut wit:  the crusty editor “and the spirit of Christmas had as little in common as a farm cat and the Audubon Society,” and “The little blades glinted” in the eyes of the girl pool secretary and her supervisor, “while they smiled politely.”  There is enough of Vonnegut in each of these stories, and certainly in the accumulation, to make us willing prey to what Eggers calls the young mousetrap maker.