Twists and turns in a fast-moving thriller

Bob Moyer reviews a new thriller that sounds like a great choice for those long winter nights – or any time you want to lose yourself in an entertaining book. 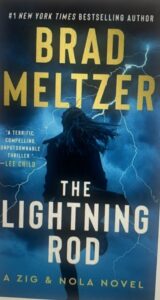 The good news is Brad Meltzer writes a big book containing lots of characters, all with interesting back stories, and plot twists and turns galore

The other good news is that his books don’t read long, he writes in short chapters that keep us interested, and he moves around the story without confusing the reader.

In his latest, he features two of the most interesting characters in current thriller literature, Zig and Nola. Zig is former head mortician at Dover Air Force Base, where they bring all the banged-up bodies of military fatalities to get fixed up for their families. He’s now in private practice. Nola is a military artist-in-residence, traveling wherever there’s a story that needs artistic interpretation. Nola and Zig have a history—she was in his daughter’s Girl Scout troop, and she saved his life in the first of the series.

In this installment, Zig, now in private practice, is called back to fix up someone he knew. He’s not sure why until Nola shows up, and he realizes he’s been used as bait. Nola is running to or running from something. When she shows up, it’s not a good sign. As one of Zig’s colleagues says, “You’re like the number thirteen—or a lightning rod:  you attract bad things.”  Sure enough, as Zig tries to parse what the murdered man has to do with Nola, she turns up either just before, just after, or during the many places Zig explores. Meltzer heightens suspense by hiding the event that lies at the heart of the murders until three quarters of the way through the book.

Meltzer doesn’t stop with that reveal. In the last quarter of the book, he whirls through plot twists that produce one revelation after another, yet never really shed light onto Nola’s search. That hunt is not revealed until the very end of the book, and it joins a passel of surprises that keep us turning pages. It also provides a springboard for what will certainly be Book 3 in the series. Be on the lookout for another big book. Soon.