Do you want to read a mystery that will really keep you guessing? Paul O’Connor found one that came from Sweden. 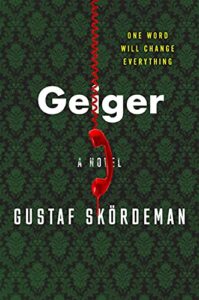 It’s been a pleasant afternoon for Stellan Boman, the long-retired but still beloved, Swedish TV star. His two daughters and his grandchildren have been visiting his home outside Stockholm.

As the visitors are leaving, a landline rings, and Agneta Boman answers. She hears one word, responds affirmatively, and heads upstairs, where she withdraws a Makarov pistol from her bedside drawer. Once downstairs, she walks into the living room and fires a single shot into the back of her husband’s head.

From there Gustaf Skoredeman’s thriller, Geiger, becomes a ravenous consumer of your reading time. As we search for a reason that Agneta has murdered her husband, we are faced less with twists and turns and more with a series of ever-complicating developments. And, while we might want to scream, “What the hell is going on?” Skordeman has written a mystery that is understandable on every page, even if every page reveals only a small piece of what will eventually answer the above question on about page 423.

Sara Nowak is a vice squad detective who would not normally have been called into the murder investigation. But she grew up with the Boman daughters; her mother was the family’s maid for more than a dozen years. And the lead detective is Anna, one of Sara’s best friends. Sara can’t be part of the official investigation team, but Anna needs her help.

This being a detective’s story, Sara must, of course, be a problem employee, not as bad as Harry Bosch, but … She has an anger issue with the johns she arrests and a willingness to operate outside the rules on occasion. But operating outside standard procedure is what makes fictional detectives so effective, and that is how Sara takes the investigation into dark areas far afield of an act of domestic violence that the official team finds far-fetched.

Being back in the company of the Boman daughters is equally troubling to Sara. Long-repressed childhood insecurities and aggravations return as the sisters treat her as they did during childhood – as a lesser person, the daughter of the maid.

As we encounter revelation after revelation, as the reason for the murder begins to take shape, Sara sinks lower, and the story becomes more frightening and heads into surprising places.