A voice of pain and passion

Bob Moyer reviews the latest in a venerable detective series that’s set decades ago but, he finds, has much to say that’s relevant to today’s readers. 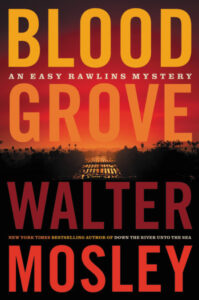 Long before Black Lives Matter, before George Floyd, a voice articulated the plight of the black man with detail, pain and passion. Here is that voice:

They gave me a ticket, knowing I’d never pay it.

The whole process took about half an hour. If I added up all the half hours the police, security forces, MPs, bureaucrats, bank tellers and even gas station attendants had stolen from my life, I could make me a twelve-year-old boy versed in useless questions, meaningless insults, and spite as thick as black tar.

He was acting as if I was oppressing him by asking him to do his job. On top of that he was asserting his God-given entitlement as a white man to banish my rights. These responses called up a feeling in me that I can only describe as revolutionary.

I knew that moment all too well. Most black men of my generation do: born as second-class citizens, living third-class lives. The grandsons, great-grandsons and great-great-grandsons of slaves.

That is Walter Mosley’s most loved protagonist, Ezekiel “Easy” Rawlins, speaking. He’s a black detective in Los Angeles, making his life doubly difficult. This is Easy’s fourteenth novel, all of them set in 1960s L.A. It’s 1969, when “The sleeping giant of white guilt was awakening and there seemed to be some kind of hope for the future. If you were innocent enough, or ignorant enough, you might have believed that things were improving in such a way that all Americans could expect a fair shake.”

Not so much for Easy. A Vietnam vet approaches him, obviously “Shell-shocked by war and stunned in civilian life,” who pleads with Easy to find out if he might have killed a man beating a woman he didn’t know in a place called Blood Grove. Against his better judgment, Easy takes the case. It’s not long before what seems simple has Easy with “…two police departments, two dead bodies, maybe three more dead bodies, a gang of desperate heist men, a gangster, and a grieving mother pressing up against me.”

Getting to that point and out again — alive — is as interesting as always. Familiar characters who add many shades of color to the story, like Easy’s childhood friend Mouse the killer, Fearless Jones the enforcer and Feather, Easy’s daughter, show up. Other characters like the courtesan who makes Easy feel “…like a child staring through bamboo bars at a Siberian tiger,” appear a couple of times. Some appear just once to point Easy to his next clue, like the elderly neighbor  who says of his deceased wife, “We had forever and now it’s gone.”

Easy weaves his way to justice through a landscape of violence, much of that aimed at him. “The Civil War had ended more than a century before but the remnants could still be felt, still killed over on any street corner in the country,” he says toward the end of the book. We can feel it in Mosley’s writing; we can feel it in our country today, not just 1969.