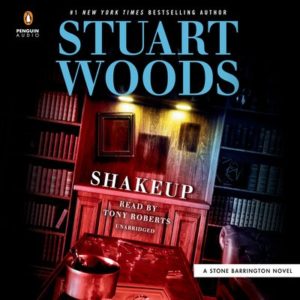 OK, here’s the book to take you from the craziness we are in to a fantasy world in which the United States has just inaugurated its second – in a row – female president, who also happens to be intelligent, principled, competent and in a relationship (of sorts) with our hero.

It’s a world where very wealthy and powerful men and women presumably grow older but never show signs of age, where they can consume all the finest food and drink they want with no ill effects, where men and women come together in a highly civilized way to enjoy the pleasures of each other’s flesh with friendliness and some affection, but no messy emotional entanglements… You get the idea.

This is book No. 55 in Stuart Woods’ series about Stone Barrington, the quintessential debonair widower enjoying the good life in this alternate world. I’ve read (listened to – these books are a good diversion when driving alone) quite a few of them over the years, but I have not gone back to the beginning to learn how a former New York City police detective became a fabulously wealthy lawyer, although I gather some of the riches came from his late wife. However it happened, Stone now leads a charmed life: He’s a senior member of a prestigious law firm but rarely seems to work and almost never goes in to the office. He owns mansions in several states and abroad. He has a luxurious yacht and a private jet with crews ready to go at a moment’s notice. And women – especially women in high places – find him completely irresistible from the moment they meet him. In fact, resisting isn’t considered; they usually make the first moves.

Shakeup is fantastic, indeed, and at times downright comic, as Stone works to keep his love life going now that Holly Barker, with whom he’s long had his style of open relationship, is the nation’s second woman president. They have to do something about all those secret service agents, not to mention the press. At one point, Stone has a burka made to order so Holly can travel incognito from her hotel room to his posh Manhattan home. Their time together will be more limited now, so he tries to make himself available if she comes to town, even if it means turning that up-and-coming young movie star or the new female head of the FBI or some other lovely and eager woman out of his boudoir. And of course, the women never mind and never exhibit jealousy.

But wait! I’m forgetting the crime/detective part of the story. (Sometimes, Stone Barrington novels seem to be primarily about his travel, mansions and sexual liaisons, but the better books include sufficient mystery and intrigue.) When Stone returns to his D.C. hotel suite after accompanying Holly to her inauguration, he stumbles over the recently deceased body of Patricia Clark, the soon-to-be-divorced wife of Holly’s nominee for secretary of Commerce, Dan Clark.

Thus starts an ever-widening web of dastardly deeds that threaten law and order in New York as well as the nation’s capital. Stone, of course, and his pal Dino Bachetti, the New York police commissioner, help solve the related murders and other crimes. The quest involves a quick trip to London, and puts even Stone in peril.

This is about as escapist as it gets. Ably read by Tony Roberts, a veteran of Stone Barrington sagas, Shakeup may have you rolling your eyes or shaking your head at times, but it will also, happily, take you right out of today’s reality.