Has crime fighting ever been so enchanting?

What could be better than to be transported to the Perigord in France at a time not so long ago when no one had heard of COVID-19 and spend a little time with Bruno, chief of police and chef extraordinaire as he solves crimes, prepares delicacies and lives the good life? Bob Moyer suggests that you let Martin Walker take you there. 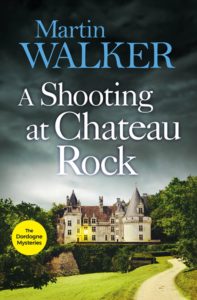 Things are popping in pre-pandemic Perigord. Ivan is back in St. Denis with his new girl friend/chef from Japan, and the restaurant menu changed again. Bruno is adjusting to supervision of the entire police region, although the increased salary doesn’t really compensate for the increased responsibility. Pamela has taken Bruno back into her bed, but she’s been a bit chilly lately. Old man Driant, that  “chaud lapin” or hot rabbit, was found dead, an apparent heart attack, with a bottle of Viagra on his bedstand and a black hair on his pillow. Bruno suspects something is awry; the old man disinherited his children, and deeded his house and insurance over to a fancy retirement home just opened down the road. Balzac the dog has a big day coming up, his first time at stud Bruno’s ex, Isobel, will come down from Paris, and she and Bruno will help him along. Gilles, who came from Paris to marry Fabiola the doctor, is writing a book about the unrest in Ukraine.

But the big news – the Chateau Rock is up for sale. Purchased years ago by a famous rock ’n’ roller named Mcrae, the estate has been a minor tourist attraction, and his family’s home. The kids grew up there, they’re off to college, and his wife wants to find the rest of her life. The kids bring a passel of their pals to spend the summer, pilling out of a van to gorge on a gazpacho made by Bruno in one of Walker’s usual painstaking recipes. The group includes the son’s girlfriend, the daughter of a Russian pal of Putin.

The shooting, you say? Don’t hold your breath. It happens late in the book. Rest assured, however, that it will make St. Denis an international center involving finance, participants from France, Russia, Ukraine and Cypros, helicopters, swat teams, a sniper and Bruno.