A taste of violence 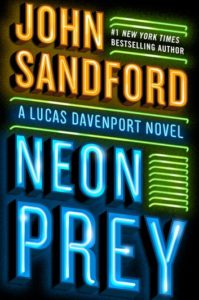 There’s no mystery why John Sandford’s thrillers routinely make it to the top of the best-seller lists. They are tautly written, with intriguing surprises and twists and turns, yet always believable. The returning characters are police officers you like and admire, despite – or maybe because of – their quirks, human frailties and occasional unorthodox methods.

This latest in the popular Prey series has Lucas Davenport, in his fairly recent role as a U.S. marshal, heading to Louisiana, Southern California and Las Vegas in pursuit of a very bad guy.

Clayton Deese has operated pretty much under the radar for years, working for a big-time loan shark in New Orleans who uses him when someone needs a little unfriendly persuasion. But when he runs into trouble during what should have been a routine job, Deese winds up arrested. Once released, he soon jumps bail, and the marshals get involved. At first, their thinking is that Deese is relatively small fry and their main target is his boss. But as they start nosing around his remote hideout in the bayous, they discover that he’s been killing and burying quite a few people for years.

Then they discover that before he buries them, he’s fond of removing a few choice cuts of their flesh to cook for dinner.

Lucas and company find themselves on the trail of what quickly becomes the most notorious fugitive in America.

That trail takes them to Southern California, where Deese seems to have taken up with what has been a pretty successful home-invasion gang involving his half brother.

Lucas and company, including the FBI, use some good detective work to narrow down – almost – where Deese and the gang are living, and they arrange a raid with local police. It all seems almost too easy – until it isn’t.

After things go badly wrong, the pursuit takes a good while longer, eventually taking Lucas and the others to Las Vegas.  Meanwhile, we learn that there is little if any honor or any other virtue among Deese and the thieves, as they turn on one another. Also meanwhile, they stage more crimes because they need money to support their bad habits.

Be warned: Deese is one of the most thoroughly despicable criminals you can imagine, and it’s unpleasant at times to read/listen to some passages in the book.

But the story is compelling, the settings – especially once the hunt moves to Vegas – are evocative, and the police work is intriguing.

Sandford writes his thrillers so that each can be read and appreciated on its own, without having read those that lead up to it. There are recurring characters and mentions of past events and developments, but you don’t feel lost or confused if you don’t know everything.

Richard Ferrone does a fine job of reading Neon Prey. I usually read while driving, and my hands were gripping the wheel tightly with this one.