Driving out the dark spirits

Don’t you just love it when a reviewer introduces you to a promising-sounding series with a lot of books in it? 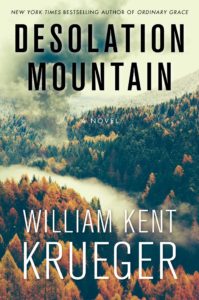 When the mining company moved out of the Iron Lake area, it left behind a ravaged landscape and a devastated economy. Over time, however, the land began to recover and the people of the Ojibwe Reservation lived through it, as they have lived through so much. Now, however, the mining company wants to move back in, and Cork O’Connor’s son starts having visions of a great bird shot from the sky.

Then a  senator opposed to the mining dies in a plane crash on the mountain. Soon, the Minnesota landscape crawls with federal forces, black vehicles and dark spirits. Cork O’Connor, the mixed blood ex-sheriff at the heart of this series, starts his own investigation, aided by former agent Bo Thorson, imported from a previous stand-alone novel of William Kent Krueger’s, The Devil’s Bed. No one can account for conflicting agencies flooding the territory, and soon locals start disappearing. The pace picks up, and so do the visions of a dark beast in the woods.

Krueger has mined this territory steadily for some years (this is novel 17 in the series), and he has not exhausted the vein of authenticity he uncovered. He neither plays up the romanticism of the Native American life, nor plays down the spiritual reality of the people. It is only the innate sense of the peoples’ way of life and knowledge of the land that enables O’Connor to help bring the truth to light. It is only great skill at developing suspense while moving action along that enables Krueger to make this one of the most action-packed of the series.