Those who have access to the Greensboro News & Record can find my review of Charles Todd’s latest Inspector Rutledge mystery, A Lonely Death there today. And they also can read my interview with Charles Todd.

In two phone calls about a week apart, I was privileged to be able to have a lengthy conversation with both halves of the team. Neither of them is named Todd: They have pen names within pen names, with the son using the original Charles Todd as his pen name, and the mother going with Caroline. Caroline lives in Wilmington, Del., with her husband but has deep family roots in North Carolina and graduated from what was then Woman’s College of the University of North Carolina. Charles, a graduate of what is now UNC Greensboro, lives in North Carolina and visits his parents in Delaware frequently.

The book I reviewed for the Greensboro paper is Charles Todd’s latest. I am taking the occasion of the publication of this review and the interview to catch up on their most recent book in a newer series, the one about Bess Crawford, a British Army nurse in World War I. That book came out last summer just about the time the Winston-Salem Journal dropped the locally written book page I had edited for 25 years, so I never got around to reviewing it. 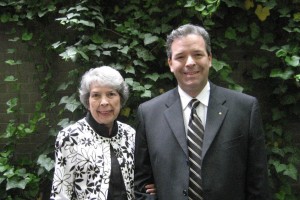 Bess Crawford, who made her first appearance in A Duty to the Dead (2009), is back in An Impartial Witness.

This series is similar to the Rutledge series in many important respects. The books are literate and beautifully written. Obviously well researched, they portray their place and time evocatively and naturally. They are intriguing mysteries, but they are much more. They are written with a deep understanding of war and its aftermath, particularly, in this case, the way Great War wrought profound changes in British life. And they also aptly convey the devastating effects that crime – murder – in civilian life has on those who live as well as those who die.

But this new series is different in important ways also. The setting is during World War I, rather than the years just after its end. As a nurse, Bess frequently moves back and forth between the front and England, often accompanying the wounded on their way home. And Bess is a gently reared, upper-class girl determined to be brave rather than a seasoned detective struggling with the ghosts of what he had to do during the war.

There are readers who recognize the quality of the Rutledge books but find them dark and even depressing. These readers should give the Bess Crawford books a try. They are written in the first person, in the voice of an idealistic young woman. The daughter of an Army officer, Bess knows that if she were a son, she would be expected to serve, so she is determined to do what she can to help the cause as a nurse. She is not entirely naïve; having spent much of her girlhood in India, she has seen human suffering and understands the gap between the haves and the have-nots.

Accompanying a badly burned pilot home, Bess notices that he clings to a photo of his wife. Later, in London for a brief rest before heading back to the front, Bess witnesses a woman involved in a emotional farewell at a train station. To her shock, she recognizes the woman as the wife in the photo the pilot had so treasured.

After she returns to the front, Bess reads in a newspaper that the wife, Marjorie Evanson, had been stabbed to death in London, and the authorities are seeking witnesses. Soon, she learns that the burned pilot has committed suicide while in the hospital.

Bess, ever one to feel the call of duty, feels that she must report what she saw. She also feels compelled to try to figure out who the man was she saw bidding Marjorie farewell, and to learn more about Marjorie, her pilot husband, and their lives.

The investigation gets complicated and even dangerous. Todd does an excellent job of showing what Bess deals with on the battlefields of France, and juxtaposing those struggles with what she encounters as she tries to sort things out when she’s back in England.

This is a fine, entertaining, thought-provoking book. Bess is a delightful heroine, and it’s heartening to see her grow in courage, resourcefulness and self-confidence. Maybe not all the changes wrought in British society by the Great War were bad.

This entry was posted in Historical Fiction, Mysteries and tagged Charles Todd, England, Mystery, World War I. Bookmark the permalink.