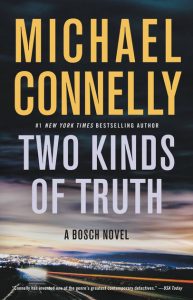 On his way to downtown L.A. from San Fernando, Harry Bosch reflects on how the landscape, the office he’s going to, the former partner he’s meeting, have all changed. Not to mention his own life, of course. After a bitter court battle with the L.A.P.D., which pitted him against both the department and many colleagues, Harry is retired now. He works as a volunteer for the San Fernando Police Department. The two bodies on his latest case were still warm, however, when Harry learned once again, the more things change, the more they stay the same.

Harry’s former partner and an L.A. D.A. show up in San Fernando to announce the release of a killer Harry put away — and it’s Harry’s fault. DNA found in the sealed evidence box exonerates the guy, meaning it looks as though Harry planted the piece of evidence that convicted the killer. If they prove their case, and they have solid evidence, Harry’s credibility and career are fatally contaminated, as are all cases he solved. Harry knows he didn’t do it; the reader knows he didn’t do it. Harry muses that: “…there were two kinds of truth in this world. The truth that was the unalterable bedrock of one’s life and mission. And the other, malleable truth of politicians, charlatans, corrupt lawyers, and their clients, bent and molded to serve whatever purpose was at hand.”

To get to the truth, Harry does what he does best — he pores over all the evidence again and again until he finds the piece that doesn’t fit. With the help of his “brother from another mother,” “Lincoln Lawyer “Mickey Haller, he unravels the case in a highly dramatic finale.

But not before he tracks down the killers in the drug-related case in San Fernando. The case drops Harry into an undercover setting where his other case almost does him in. While deep in the situation, he meets someone who tests an “…essential brick” in the wall of who he is. Faced with depravity and danger, he passes from sympathy to action. He does what he needed to do.

So has Connelly, concocting once again what we have known all along, in a story we haven’t heard before. He truly is a master of the genre.