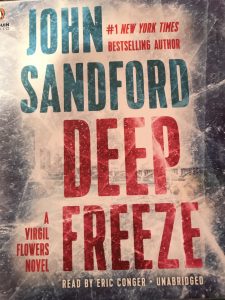 If you don’t think murder and assorted lesser crimes can be funny, you haven’t read any of John Sandford’s Virgil Flowers detective novels.

A detective with the Minnesota Bureau of Criminal Apprehension, Virgil gets sent into all manner of interesting backwoods and small-town locales to solve the crimes that might baffle the local cops. In the process, he encounters a lot of colorful characters. Sometimes he makes some of them angry. He doesn’t like to carry his gun, so angry people can be a problem.

This time out, Virgil is sent to Trippton, a small town along the Mississippi River where the body of the richest woman in town has been discovered frozen in a block of ice. Virgil’s been to Trippton before, when he busted the corrupt and homicidal local school board, most of whose members are still in prison.

Since Trippton is a small town, everybody already knows Virgil and has opinions about him. Sometimes that’s good; sometimes it’s not.

We know from the beginning who killed the woman. It happened right after the committee planning the 25th reunion for their class at the local high school met at her house. “Bug Boy,” who inherited the local pest-control business from his father and got the local Dunkin’ Donuts franchise in his divorce, has always had a secret passion for the woman, even though both of them had been married, for a while but not any longer, to other people. After their classmates leave the meeting, he, emboldened by her treating him more or less cordially, goes back into her house with a bottle of champagne and high hopes. When she slaps him and rakes his scalp with her fingernails, he instinctively moves to hit back, forgetting the heavy bottle of champagne in his hand. When he discovers that he killed her, he’s devastated, but he’s also determined to protect himself, since, he reasons, he didn’t mean to, so he’s not really guilty.

He leaves her on the living room floor, rearranging things a little in hopes that whoever finds her will think she fell down the stairs. Then he hurries off to establish his alibi by signing karaoke at a local bar.

When her body is found in the block of ice in a part of the river that’s thawed because of a sewage plant outflow, Bug Boy is as shocked as everybody else.

It takes Virgil a while to figure out that he’s looking for two people, the murderer and the person who dumped the woman, her purse and shoes into the river for whatever reason.

Meantime, his bosses pressure him into helping a private detective from California who has been sent to Trippton to stop a ring that’s got a hot business selling Barbie dolls that have been modified to be very vocally sexy. His efforts on that score raise a lot of ire because times are tough and a number of locals are making money off the Barbie-Os. When Virgil snoops around too much, he gets beaten up by a gang of irate women outside another local bar.

His investigations into both the murder, involving as it does a high school reunion, and the Barbie-O ring, lead him to discover a lot of the adultery and even B&D (bondage and discipline) that, along with ice fishing and snowmobiling, help the locals make it through the long, cold winters.

He also gathers more evidence that a lot of criminals are really pretty stupid, sometimes in an amusing sort of way.

This is a good crime novel well blended with a good satire on life in small-town Minnesota. Eric Conger, who has recorded a lot of Sandford’s books, does a great job of reading, appropriately deadpan.