Where’s Bob, who might as well be Waldo? Japan? Michigan? Germany? In his heart and in his taste buds, at any rate, he’s lately been in the Perigord region of France, savoring the latest Bruno, chief of police, mystery. Here’s his review. 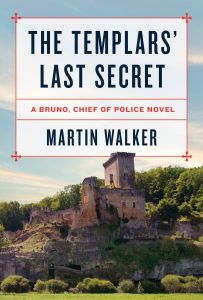 Near the town of St. Denis, a woman has fallen to her death below the medieval fortress of Commarque. When Bruno, Chief of Police, gets to the site, he interviews the Count of Commarque about the day’s events. In return, the Count briefs Bruno on the last 800 years, and how interest in the Knights Templars’ reputed treasure may have some relevance to her death. In conclusion, he says: “Sometimes I wonder if we don’t have too much history here in France.”

What a joke on the part of the author, who can’t get enough of French history.

His use of history is what makes this series so refreshing as well as remarkable. Martin Walker draws upon detail from the deep history of France’s Perigord region to accentuate his carefully drawn plots. In this latest episode, besides the Templars’ history, he identifies research about one of the “seven daughters of Eve” who lived in the region, and is a progenitor of 45 percent of Europe’s population. Bruno drives along the Grand Roc, “…a sheer cliff 50 meters high and a kilometer long with an overhang where people have lived 15,000 years.”  The Cave of Lascaux, with its remarkable prehistoric paintings, is not only central to this story; it is only one of 25 painted caves in the area. Walker fills his narrative chockablock with engaging information.

None of the detail, however, detracts from the plot development. On the contrary, each fresh ingredient enhances the recipe that Walker has perfected over the many volumes of this series. Into the peaceful village of St. Denis, he draws history into confrontation with contemporary events, producing here what Bruno calls a “…strange mixture of Templars, Crusaders, Jerusalem in history – and Arab-Israeli politics.”  It is up to Bruno once again to solve the mystery.

And Bruno, once again, is up to the challenge. Not only does he kiss babies, save lives, coach rugby, change lives and cook, but he also displays one of the finest investigative minds in mystery fiction. The author gives one of the best descriptions ever of the process that makes Bruno one of the leading detectives in today’s literature:

A very faint idea began to form and almost as quickly it went, too elusive to stay. He recognized these subterranean mental stirrings. Sometimes Bruno thought of them as hunches, and sometimes as an idea coming from a part of his brain that was not entirely his — a part formed of curiosity, experience and intuition — that kept churning, calculating and making hypotheses that would suddenly erupt as a breakthrough. He knew the components of this latest puzzle — an ancient château and an Arabic name, Crusaders and Templars, a modern woman falling or perhaps being pushed to her death – and at some point and in some mysterious way they would fall into a pattern that made sense to him.

Whether you are in the mood for a good mystery, or a good meal, Bruno’s latest adventure will probably be to your taste.