Can Jack be back? 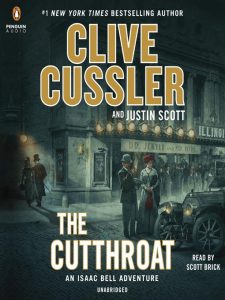 Isaac Bell, the chief investigator for the Van Dorn Detective Agency, would not normally be assigned to find an attractive young woman who has run away from a nice home in hopes of making it big as a Broadway actress in New York City. After all, it’s 1911, and a lot of well-bred young women chafe at society’s restrictions and hope for more excitement and glamour in life.

But this particular young woman, Anna Pape, has a father who has pull with Bell’s boss, the founder of the agency. So Bell starts to work, but before he can track down Anna, she’s found murdered in a particularly gruesome way. Plagued by thoughts that he could have saved her if he’d acted more quickly, Bell vows to solve the case. The more he works, the more he realizes that Anna’s death was not a singular act.

As he becomes convinced that a serial killer is preying on young women, Bell presses his investigation, even traveling to England to find out more about the mystery of Jack the Ripper. That serial killer was never identified, and the murders stopped abruptly a little more than 20 years ago. Could “Jack” have come to the United States?

Bell becomes obsessed with the case, wondering how many young women have died, and how many more might be killed if he doesn’t find the murderer. His investigation takes him across the country, as Broadway shows hit the road. And the more Bell learns, the more chances the killer seems to be willing to take as he preys on vulnerable women.

Clive Cussler is one of those successful authors who have something of a publishing empire, with a team of writers helping to produce new volumes. Although the books in his various series have some things in common, the plots are always inventive enough to keep the stories fresh. And the stories are enriched by a considerable amount of fascinating information. Even his contemporary series usually incorporate some interesting history, and the Isaac Bell books, set in the early 20th century, are rich with descriptions of notable personalities, vintage cars, train travel, the entertainment world including the nascent movie industry, and other intriguing details.

As usual, Scott Brick’s reading bring the audio version alive in a way that fits the mystery and mounting suspense. This is a great book for a road trip, or any time you want a lively, reasonably intelligent diversion.