“Jack is back,” and fortunately, so is Maggie Hope 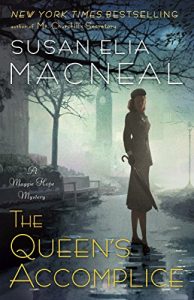 Maggie Hope, intrepid spy, code-breaker and all-around spunky young woman, is at it again, in the thick of World War II action and intrigue. Susan Elia MacNeal’s sixth Maggie Hope mystery offers plenty of intrigue, excitement and insight into how life went on for people in the dark days of the war.

Having returned to London recently from accompanying Prime Minister Winston Churchill to the White House after Pearl Harbor finally brought the United States into the war (Mrs. Roosevelt’s Confidante, 2015), Maggie is biding her time working as a “girl Friday” (too often, that means serving tea and enduring sexist slights) at the Special Operations Executive’s offices on Baker Street. Far from being “only” a secretary, Maggie has succeeded at challenging secret-agent assignments and has taught aspiring spies. But she’s trying to wait patiently in London until her recently discovered half-sister, Elise Hess, a resistance fighter in Berlin, can be brought to safety there.

As might be expected, Maggie is not in for a quiet respite, much as it might be needed. “Jack is Back” – Someone is brutally killing young women in a ghoulish re-creation of the Jack the Ripper murders, leaving messages in case anyone fails to make the connection. But these victims aren’t prostitutes; they are daring young women who are volunteering to be spies and saboteurs for the war effort. Maggie finds herself working with MI5 and the London police to try to stop the “Blackout Beast.” Unfortunately, the blackout that’s necessary to protect Londoners from Nazi bombings affords the new Jack lots of opportunity to carry out his deeds unseen.

Other things are happening as well, lots of things. Maggie is convinced that something’s badly wrong with one of the female agents in France, but she can’t get her boss at SOE to pay attention to her worries. Friends help her move back in to the house she inherited from her British grandmother, where almost immediately she takes in one of her old friends who how has had to flee her home, infant in tow.

Two other friends – male and female – are preparing to head for France as spies, and Maggie’s past with the man makes the woman suspicious.

Maggie briefly sees her father, who’s in hospital, and readers learn that the treacherous woman who is Maggie’s mother as well as Elise’s is still a factor to be feared.

Meanwhile, Maggie renews her relationship with Queen Elizabeth and the young princesses.

And in Germany and France, Elise is having her own problems and adventures.

It’s easy to see why these books have become best sellers. Susan Elia MacNeal deftly weaves a great deal of historical information about a momentous time into fascinating mysteries and the adventures of a daring and determined young woman. These novels aren’t deep, psychological thrillers, but MacNeal gives us enough of a look into the thoughts and emotions of Maggie and other key characters to add depth to the fast-paced stories.

With plenty of action and compelling storylines, these books lend themselves well to audio presentation. I suppose, since Maggie is half American and was raised in the States, an American reader would have worked also, but Susan Duerden’s British accents (yes, she makes appropriate changes for various characters) enhance the story’s atmosphere.

The Queen’s Accomplice concludes with enough loose ends, unanswered questions and promises of action to make Maggie’s fan impatient for novel No. 7.