Bob Moyer sent this review of from Germany. How can he read this book when so close to France and not go there? It’s a mystery to me. 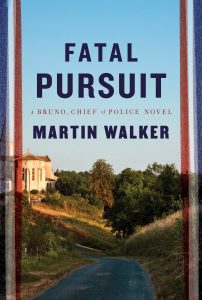 That’s the solution for a minor mystery in this series, food porn disguised as murder mysteries set in the French countryside. Martin Walker lards his narrative with culinary delights of the Perigord region, while slowly adding in the ingredients of a crime plucked from the rich past of the Dordogne. In this latest adventure of Bruno, Chief of Police for St. Denis, stuffed neck of duck is the solution for a perfect cassoulet. An ongoing mystery involving Bruno is addressed with a menu for a first date in a French farmhouse. Will goose eggs, ecrevisses a la nage and vodka cook up the right atmosphere for romance?

Interestingly enough, cuisine takes a back burner to the larger mystery in a Bruno story for the first time. The plot here is driven by a Bugatti Type 57 Atlantic, lost somewhere in southern France during World War II. One of only four of its kind, it’s worth millions if found. The search for the car fuels the activities of a freelance journalist, a rally car driver, an absentee landlord and two comrades from the Resistance. As the narrative careens down the country roads around St. Denis, it leaves two bodies by the wayside and leads to international intrigue. The implication of larger crimes brings Bruno’s brightest former flame, Isabelle, back to town, complicating the romantic subplot. Bruno, with his ear tuned to nuances of conversation, his eye out for clues, and a taste for the best in food and wine, comes up with the killer just before the book gets to the finish line.  All in all, another well-paced adventure with a little less feasting than usual.