Parting words from a fine writer

Bob Moyer has taken a respite from his travels long enough to pay tribute to the last book from a favorite author. 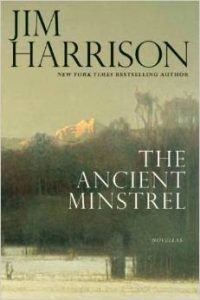 “No one has ever read novellas”: In an interview shortly after his last book came out, Jim Harrison said his agent told him that when he started writing them. Probably very few did, until he started writing them. His Legends Of The Fall became a critical and popular success, a well-made film, and just one of many that made Harrison’s fame and a bit of a fortune. Nobody does it better, though some have tried.

Rather, did it better. Harrison died in March, shortly after Ancient Minstrel was published. This collection of three novellas is a fitting and poignant conclusion to a phenomenal career; it contains, no, it brims with what he has always done best. The title story, a “fictional” memoir, has us matching up facts with the randy, aging but rambunctious novelist who narrates — the blind eye incurred in childhood, the death of his sister and father, the illicit sex with students. Even without these details, however, the story surges with the life force Harrison always injected into his prose — hunting, the outdoors, the love of animals (pigs in this case), love, period, and lust, infinitely. Harrison will be missed for his iconoclastic syntax that produced sentences no other writer would think of, let alone write down.

And writing down is the key here. All told, this narrative is about the writing life, what feeds it, how the writer fails it, and what frightens the writer — in this case, Ancient Minstrel that show up in his dreams. Aspiring writers could parse a primer on how to write out of these pages, as Harrison doles out wisdom learned from having done much of everything wrong at some time or another. The essence of Harrison’s writing, the driving force, appeared in the aforementioned interview. He mentioned how the death of his father and sister  “… served to fuel me to write totally without compromise.”

His fiction, however, rings more viscerally than biographical fact. At the book’s conclusion, he phrases the experience this way:  “If this can happen to the ones you love you may as well follow your heart’s wishes in your time on earth.”  Harrison’s writing about the craft of writing is testament to his place in the pantheon of American writers.

So is the second novella, Eggs, a poignant product of the craft Harrison writes about. Placed in rural Montana during a World War II/post-WWII time frame, the setting affords the author the range best suited to his writing:  farming, long walks, cooking, hunting and man’s relation to animals — in this case, a woman’s love for her chickens. From the age of 7, Catherine was in thrall to chickens. Returning from an arduous journey, she puts a cot into the chicken coop for her first night home. She chased a likely paramour off the property when he kicked a chicken and killed it. And she fired the lawyer who laughed when she said she wanted her ashes spread in the chicken coop. This complex relationship is juxtaposed with her developing struggle to get pregnant as she ages:  “Eggs were the fundamental fact among all females in the mammalian and most other species.” Her ob/gyn friend makes fun of her for bringing eggs to her appointment, and her difficulty is exacerbated by “…the vacuum in her soul where the love of men should have been.”  It is with some relief, then, when she manages to get one of hers activated. Harrison makes the journey an engaging, and elementally profound, one.

In the last novella, Harrison settles a score with those critics who have excoriated him over the years for his “political incorrectness,” i.e., his writing about dirty old men such as ex-state cop Sunderson and his dirty doings. Although The Case Of The Howling Buddhas is the premise here, it is not the point. Sunderson has been plagued by a penchant for underage girls in previous books; this fixation is viewed by many a reviewer as Harrison’s hang-up. Few understand that there is little joy for Sunderson. His suffering, his conflict, is greater than the prurience evoked in any description. That conflict burdens the narrative with foreboding, and, sure enough, Sunderson commits an exquisitely described suicide. In other words, Harrison kills off a controversy by killing off a controversial character. No one will have to hear from Sunderson again.

And, sadly, no one will hear from Harrison again. RIP, you rascal you.