Wealth, danger and scandal – what more could you want? 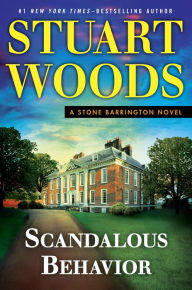 Stone Barrington, having had many adventures, close calls and romantic encounters recently (as always), decides to get a little R&R visiting a friend (lady of course) in the English countryside. But anyone who knows Stone knows that he will find a lot more than peace and quiet.

This is, I believe, the 36th in Stuart Woods’ series of thrillers about Stone Barrington, a former New York City cop turned lawyer turned incredibly wealthy and successful man who doesn’t really seem to need to spend much time doing anything but amusing himself, spending wads of money and climbing into bed with an endless succession of always willing, lovely, refined women.

This time out, Stone, with the flick of a pen and no prior interest, buys a Downton Abbey-style English estate complete with a stable full of horses, a private airfield and a hermit-in-residence. A very accomplished, sumptuous and available woman is completing a renovation of the house, so we know what’s going to develop there.

But, as they will, events conspire to complicate Stone’s life and those of his friends and family. Hardly has the ink dried on his purchase agreement when a prominent local man is found murdered almost on his doorstep. The death, investigated by a local member of the constabulary named – wait for it – Inspector Holmes, stirs up old scandals and secrets among the local gentry, including the dying man from whom Stone has bought his manor house.

Meanwhile, even as Stone is taking some normal interest in this mystery around him, a sinister threat arises from back in the good old U.S.A. Stone’s son, Peter, is, at a surprisingly early age, making it big in the movie world. But his new hit film steps on some dangerous toes: Dr. Don Beverly Calhoun, the well-heeled head of a cult called The Chosen Few, is incensed, convinced that the movie slanders him and his lucrative “religious” movement. To keep Peter and his associates safe, and to further their movie enterprises, Stone persuades them to move operations to his English estate and a neighboring manor that will be ideal for the next production.

Calhoun, used to getting rid of people who get in his way, decides to take down Stone Barrington. Stone, of course, doesn’t take Calhoun’s assaults passively. The game that ensues grows more and more dangerous – but who is in more danger?

Woods’ Stone Barrington books are written to a tried-and-true formula, with the latest version of the plot, the setting and the women keeping things interesting. Those who want their thrillers to be somewhat credible should look elsewhere.

Those, however, who are willing to suspend a great deal of disbelief, and who enjoy the occasional novel filled with over-the-top lifestyles, will find Scandalous Behavior just their cup of tea (served in bed, by the maid, of course). Stone is like a latter-day James Bond in his prowess as a swain, and his behavior is along the lines of some of Dirk Pitt’s power couples: He can party, live lavishly, jet around the globe and, without missing a beat, best a villain. If you find it ostentatious and offensive for someone to plunk down cash for two incredibly expensive automobiles in one day, after having just bought a mansion to add to his list of homes (and a new wardrobe? Did I mention the clothes?, then give this book a pass. If you have trouble believing that such a thoroughly American man speaks as though he wandered out of a Jane Austen novel, stay away. But if you enjoy the occasional pure escape novel, and believe that Woods is writing with his tongue well into his cheek – relishing in how outrageous his book is – you might find this one entertaining.

It’s especially fun as an audiobook, read in appropriately dramatic style by Tony Roberts. I listened while driving, and I almost felt as though I were cruising along in one of Stone Barrington’s pricey new cars.