It’s quite evident that Bob Moyer read this latest Bruno novel with relish. 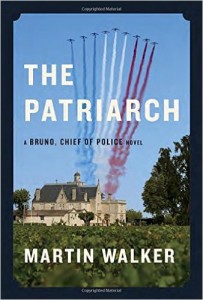 When Martin Walker concocts a Bruno, Chief of Police novel, he tosses in so many appetizing ingredients — French culture, French history, his love of cooking, Bruno’s love life — that the reader might miss the mouthwatering stock he stews everything in: the plot. Always serviceable, sometimes profound, Walker’s narrative uses murder as well as meals to bring his theme of how the deep traditions of the Dordogne region affect, and are affected by, current events. In Bruno’s world, the past is never past; it’s always present — and there’s no time like the present to have a good meal.

The past in this episode manifests in THE PATRIARCH, a French World War II hero who flew for the Russians and served as a liaison between the governments during the Cold War. The present appears in his daughter-in-law, the lovely Madeleine, about to throw herself into the national political fray.

The plot starts brewing when the Patriarch’s good friend Gilbert dies after a reception at the estate. Everyone thinks it’s accidental. Everyone except Bruno, that is. In spite of denial, intercession, and an outright attempt to kill him, Bruno collects clues others overlook, asks questions in places and of people no one else would consider, and follows threads of inquiry into international affairs. Before long, the brigadier in charge of national security descends, and once again, St. Denis becomes a hub of international attention.

Meanwhile, meals break out wherever Bruno appears:  a light luncheon for the Red Countess he saved in a previous event, a French meal cooked by the daughter of an English ex-pat intelligence officer, a hasty lunch thrown together at Bruno’s cottage for the Brigadier and others, and even a post-coital snack commandeered out of a refrigerator. Every meal provides a feast for the culinary imagination, and usually some fodder for Bruno’s investigation. The past may never be past, but the police chief never stops probing either.

Cooking, however, is not the main dish here — Madeleine is. Bruno starts salivating after her from the opening pages. His attraction to her, and her flirtation with him heat up with each turn of the page and plot. It’s unlike Bruno to dally with a person of interest in the narrative, and he has reason to be concerned. As Bruno plunges forward to a solution and a resolution of his relationship, Walker draws an intricate web that makes the village of St. Denis a culinary hotspot and a converging point for international intrigue, seasoned in the past but flavored with the present. It’s an epicurean Francophile’s literary extravaganza.