Sleuthing for the Nazis 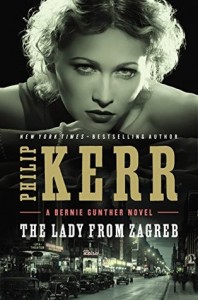 It’s 1942, the beginning of the end, the Soviet Union has not fallen, hundreds of thousands of people are being killed, and Bernie Gunther has an appointment with Hitler’s henchman, Dr. Goebbels, whom he calls the “Mahatma Propagandi.” Humor in the face of horror – just one of the many characteristics that make Bernie such a marvelous protagonist in this rewarding series.

His multifaceted persona enables him to maneuver adroitly around any crime the Nazis ask him to solve, while illuminating with his observations the context in which it occurs. It seems he has a knack that they can’t do without, and a penchant for tongue-in-cheek comments that he has to keep in check. The Nazis, and the author, have him right where they want him.

When he gets to the appointment, he learns that Goebbels wants him to find the father of Germany’s most popular movie star, and deliver a letter to him. It’s a favor that the Mahatma can’t officially order; he wants her in his next movie, and his bed. Bernie immediately makes a simple task more dangerous by beating Goebbels to the lady’s boudoir. Caught between a rock and a soft place, he is soon swept up in a major lie, and a series of conspiracies involving Swiss skullduggery and a lot of gold.

As the bodies pile up, Bernie travels through the narrative throwing light on historical events, a hallmark of this series. Atrocities by the Croatian Ustase that turn even the stomachs of the Nazis, the horror that is the Brandenburg Prison, the Wannsee mansion where the Final Solution was first discussed, all appear as background to the plot. We meet the young Austrian officer Kurt Waldheim, future head of the United Nations; the cruel spymaster of the OSS, soon to be the cruel spymaster of the CIA; and the frightened former owner of the Wannsee mansion.

As Bernie works his way through the many clues thrown out here, he brings so many of the background features into the foreground of our attention. While barreling down the Autobahn in Goebbels’ Mercedes roadster, he reflects how Hitler was met at the gates of prison when he was first released by the owner of the motor company Daimler Benz, and given a car: “One day I hoped some thoughtful historian would point out the close connection between the Mercedes-Benz motor car and Germany’s favorite dictator and that the lord would find a way to pay these bastards back for their help in bringing the Nazis to power and keeping them there.” Perhaps some historian has, but he certainly didn’t reach as many readers as Kerr just did.

Some of the best dialogue, and greatest dilemmas, occur inside Bernie’s head, of course. Reflecting on his inescapable conflict, he recalls the medieval Auerbachs Keller in Leipzig with “…all the pictures on the wooden walls of Faust drinking with Mephistopheles. I’ve often felt an affinity with him, too. How else was I to explain my still being alive?” At any moment, Bernie could be shot, hung, or even worse, sent to the front. That’s why his dalliance with The Lady From Zagreb doesn’t disturb him in the slightest: “It felt like a very welcome intermission in the black-and-white horror movie that was my life.”

As the plot plays out, the author throws around clues that make both Bernie and the reader a little smug about what the solution is. To Kerr’s credit, and the reader’s delight, those conclusions jumped to so readily take unexpected twists, leaving Bernie bereft, but still alive for book number 12 in the series, coming in August 2016.