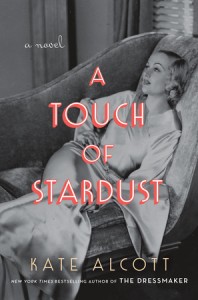 Kate Alcott has done it again. She’s written another historical novel that’s a romance – the adventures and travails of one fictional young woman – wrapped in a real story, with real people.

Earlier, Alcott gave us The Dressmaker, a novel grounded in fact about the sinking of the Titanic and its aftermath, and The Daring Ladies of Lowell, which spins its tale around the real story of a the murder of a young woman textile-mill worker in Massachusetts in the 1830s.

This time Alcott inserts her fictional heroine, Julie Crawford, into the Hollywood intrigue and drama surrounding the filming of one of the greatest movies of all time, Gone With the Wind, in 1939.

Julie is a young college graduate from a good family in Fort Wayne, Ind., which just happens to be the hometown of Carole Lombard. Lombard, of course, is the actress with whom Clark Gable (Rhett Butler in the epic movie) is having an affair while awaiting his divorce, much to the displeasure of the studio.

Despite her parents’ misgivings, Julie has come to Hollywood with hopes of becoming a screenwriter. She takes a job in the publicity office at David O. Selznick’s studio, but soon she is hired away to be Lombard’s personal assistant. That job not only thrusts her into the personal world of Lombard and Gable, but also gives her a good vantage point to view the crises and triumphs of the film’s production.

Through Julie’s eyes, we witness Selznick’s difficult, demanding personality. We see the racism, sexism and anti-Semitism that were rampant in Hollywood. We become aware of the growing menace of Hitler across the Atlantic, and how the movie moguls had no desire to tell the story of what was happening in Europe.

It’s great fun to read the details and insider stories of how this classic movie was put together in the low-tech world of the late 1930s.

As in Alcott’s two previous novels, the thread that holds the book together is Julie’s personal story – her efforts to become a screenwriter, and, of course, her love life. Julie falls in love with Andy, a young assistant to Selznick. Andy is Jewish, a fact that would appall Julie’s father. After his grandparents in Germany are arrested by the Nazis, Andy grows increasingly disillusioned with the world of movie-making and conflicted about his relationship with Julie.

Combining such a love story with fascinating history, working in real historical events and figures – this is Alcott’s stock-in-trade. Each of her novels draws some criticism along the lines that she’s trying to tell too many stories, that the historical novel might be better without the romance thrown in.

Those who don’t want a fictional heroine and her love affair worked into the mix should probably read some other book. The rest of us can enjoy a story that moves along nicely amid a fascinating and well-researched bit of history.  Alcott includes an informative chapter at the end that details what happened to Lombard, Gable and others after the months depicted in the novel.

A Touch of Stardust might not be another Gone With the Wind, but it’s an entertaining book, worth the read or, read superbly by Cassandra Campbell, the listen.

This entry was posted in Audio Books, Historical Fiction, Popular fiction and tagged A Touch of Stardust, audiobooks, Gone With the Wind, Kate Alcott. Bookmark the permalink.