I’ve come late to the Easy Rawlins mysteries, mostly because my longtime reviewer friend Robert P. Moyer always snatched them up. Bob’s thoughtful praise for Walter Mosley’s books always made me want to read them, but the downside of running a book review page or site is that you feel pressure to read something that isn’t already being reviewed by someone else.

Now, with Bob off on his world travels or possibly petanquing or haikuing somewhere, I’ve had the pleasure of dealing with the latest in the series myself. I listened to the audio version, and I have no doubt that the book would be equally pleasurable and rewarding in print form. By rewarding, I mean this is a book that ought to be read in late 2014 America, especially by white people who want more insight into the controversy over police dealings with black Americans. 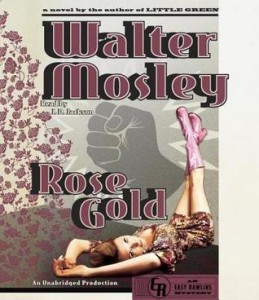 Walter Mosley started his acclaimed Easy Rawlins mystery series in 1990 with “Devil in a Blue Dress,” a story about a hard-boiled detective in Los Angeles who’s different from most others in popular fiction. The book was made into a popular movie starring Denzel Washington in 1995. Easy is a black World War II veteran, and in the early novels, he’s working without a PI license. He’s savvy about negotiating his way among the various communities in L.A. – white, black and Latino. He can go places where white people can’t go, and he deals with some, shall we say, highly interesting people.

The books are good, solid detective stories with well-developed plots and subplots, plus enough danger and suspense to keep the reader on edge. They stand out for several reasons, one of them being the character of Easy, a perceptive and thoughtful man who follows his own well-developed ideas of right and wrong. What’s right or just might not always coincide with what’s legal. Easy’s outlook on life gives the books another of their strengths: Through his wary eyes, we see how things look and feel, how society operates.

In 13 books now, Mosley has taken Easy through the late 1940s, the 1950s and almost through the sex- , drug- and protest-heavy 1960s. He even killed Easy off – or so everyone thought – a couple of books ago, but brought him back to life (he’d been in a coma, we learn) with a slightly more philosophical outlook six years later. This is the second book since Easy’s near-death experience.

Easy’s grown weary of the PI life, but his adopted daughter has been accepted to a pricey private school, and his rental houses need repairs.

When an armed delegation from the LAPD shows up at the house he’s moving into to ask for his help with a difficult case, he’s both reluctant and skeptical. In his experience, little good comes from dealings with white cops.  The offer of a hefty check plus help with his building-inspection problems helps persuade him to take a look. Apparently, Rosemary Goldsmith, the college-student daughter of a wealthy weapons manufacturer, has been kidnapped. The police believe a young black man, sometimes called Robert Mantle and sometimes Uhuru Nolica, is involved. They think Easy will have better luck than they will at tracking Mantle down.

As Easy begins to investigate, things become very complicated. His car is shot up, he’s ordered off the case by various federal agents, and he begins to wonder if Rose Gold, as he calls the girl in his mind, is really a victim. He wants to help save the girl , of course, but he’s also well aware that Robert Mantle’s life is in danger – in more ways than one. He suspects that Rose is not as innocent as she seems, and something smells decidedly wrong within the LAPD.

Various subplots make the story even more interesting and yield more glimpses of life in Southern California in the tumultuous ’60s.

This would be a good book at any time, and J.D. Jackson’s expert reading makes it a great listen.

What makes it an important book for this moment in the United States is one of the aspects that’s made Easy Rawlins books into cultural treasures. Without being strident, without pontificating, Easy makes it starkly clear what it’s like to be a black male in a society where power is in white hands, and most white people assume you’re trouble. Mostly, he fumes inwardly, forcing himself to do what he needs to do for self-preservation without sacrificing his dignity. Occasionally, he can’t completely contain his rage. What could be a good detective story becomes something more powerful as we see a good man trying to do what he believes is right in a world that often seems stacked against him.

Listen to Easy’s story, or read the print version. It won’t be the first time that good fiction teaches us more than the sound and fury in the “real” world can.

2 Responses to Looking through Easy’s eyes