Antonio Hill’s day job, according to the blurb on the cover of this audio book, is translating English-language fiction into Spanish. He must have analyzed what makes fiction successful as he pursued his translations. Like his debut thriller, The Summer of Dead Toys, published a year ago, his new book is expertly plotted, intelligently written, and rich in characters and setting. 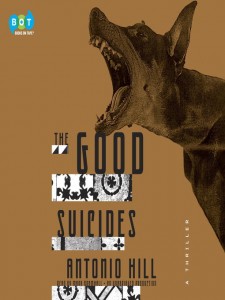 Inspector Hector Salgado is back, in fine style. Oh, the Argentine-born, short-tempered detective is still having trouble sleeping, and still struggling with unhealthy habits. He’s still trying to deal with the disappearance of his former wife (who had left him for a woman), not to mention the challenge of raising their teenage son without her. But his personal problems are not going to keep him from figuring out what is happening to the high-level employees of a cosmetics company in Barcelona.

Alemany Cosmetics is a successful, family-owned business. When Salgado is called to investigate the apparent suicide of Sara Mahler, a high-level secretary at the company, he is startled to find that a gruesome photo of dead dogs hanging from a tree had been sent to her phone just before she jumped in front of a subway train.

As he begins to investigate, Salgado realizes that a man who had apparently killed his wife and young child before turning a gun on himself a few months earlier also was an Alemany employee. With his instincts telling him there is likely to be some connection between these two deaths, he begins looking into the company as well as into the lives of the two dead employees.

As in Hill’s first detective/thriller story, the more Salgado investigates, the deeper and more complicated the mystery becomes. It seems that the two dead employees were part of a small group of key personnel who participated in a team-building weekend retreat at a remote country house.

And all the people who attended the retreat seem to have, at one time or another, received an anonymous email saying, “Never forget” and including the photo of the hanged dogs.

Not even sure what crime or crimes he might be investigating, Salgado must use all his wits to break through the secrecy surrounding the company and its employees. At any moment, another suicide may be imminent.

While Salgado is trying to sort through this ominous puzzle, his partner, Leire Castro, is out on maternity leave, waiting for her baby to arrive. Bored, she turns her attentions to the unsolved case of what happened to Salgado’s wife, Ruth.  Her investigation is unauthorized, and she doesn’t want Salgado to know about it. But she may be stirring up a lot more than the bargains for as she pries into the darker corners of Ruth’s past.

Hill weaves these two plot lines deftly. In addition to a first-rate, tightly plotted detective thriller, this becomes a story about the dangers posed by keeping secrets, especially when complex cover-ups are required. And, like the first book, it’s also a story about family, love and loyalty – and how those forces can work for good or ill.

The Summer of Dead Toys was set in the steamy summer of Barcelona. This book shows us Barcelona in an unusually cold winter, an apt setting for this chilling tale. In both books, Hill brings the city alive, just as he does his characters.

Beware: This story ends with a twist that makes it difficult to wait for Salgado’s next big case.

Mark Bramhall does a fine job of reading the audio version. The listener has no trouble following the complex plot, even with the alternating and occasionally intersecting lines of Salgado’s and Leire’s investigations.