One night, many years ago, I saw Tom Dillon ski down Summit Street in Winston-Salem. So when he asked to review a book about skiing and snow, I wasn’t surprised. As he points out, this book has some important things to say even to the non-skiers among us. 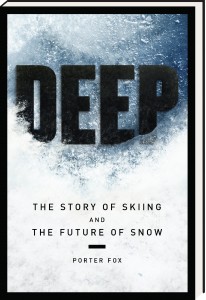 I was introduced to skiing 50 years ago on a glacial snowfield in Germany, and I’ve often wondered if that snowfield is still there year-round. I got a hint several weeks ago that things may have changed some.

We were on a train climbing over Switzerland’s Bernina Pass, headed down toward Italy, and it was clear that despite the calendar – it was June 1 – winter had only recently departed. The lakes were still frozen, snow still covered everything, and a few backcountry skiers were still out, even with the lifts closed.

But there with all that snow, with a branch of the Inn River dribbling out of a nearby snowfield, sat something I never expected to see that high up in the Alps. It was a bank of snowmaking machines quite similar to those you’ll find at any eastern U.S. ski slope.

The sight of those snow machines made more of an impression on me than almost anything in Porter Fox’s book, which rode in my backpack all around Switzerland. But the point was the same.

Since 1850, Fox reports, European glaciers have lost fully half their volume, 26 percent since the 1970s alone. In the summer of 2012, he says, the famed Matterhorn was snow and ice-free for the first time in recorded history. And with alpine temperatures rising three times faster than the global average, it’s possible to see skiing there as being in a crisis.

That’s a problem for a nation as tourism-dependent as Switzerland, as two geographers from Zurich University noted in a recent report, “Climate Change as a Threat to Tourism in the Alps.” They warned of both significant costs and probable job losses if things don’t change.

But it’s not only skiing that has a problem, and it’s not just Switzerland, Fox hastens to add, for those who might consider fewer downhill runs something less than a global crisis. “As people in the Western U.S. have already seen,” he says, “declining snow depth is the first domino in a long line that can set off a downward spiral of environmental catastrophes.”

Skiers are, if you will, something like canaries in the coalmine where climate change is concerned. Perhaps that’s why some skiers and snowboarders are belatedly beginning to talk strongly about climate change.

Fox, the editor of Powder magazine, published this book late last year, and it’s had a lot of notice, both good and bad. There was a full-page feature story in the Sunday New York Times a few months ago, basically an excerpt of the book. Jeremy Jones, pro snowboarder and founder of the movement Protect Our Winters, calls the book “the most important book on snow ever written.”

But John Fry complained in Skiing History magazine this spring that most ski areas are not struggling, as Fox insisted. Fry said Fox, in places, “struggled with facts.” And then there are the usual legions of climate-change deniers, who also struggle with facts. Yes, that’s an editorial comment.

Fox grew up skiing the hardpack of Maine, but after he was introduced to western skiing, he shifted allegiances and became what we in the sport would refer to as a “powder hound.” Since going to work for Powder magazine, he’s skied all over the world and has been able to take a good look at what’s happening to winter.

This book opens with the story of a giant snowfall and subsequent catastrophic avalanche in the Cascade Mountains of Washington state during the winter of 2012. That accident was also the subject of a 17,000-word story in The New York Times, for which writer John Branch won a 2013 Pulitzer Prize.

The avalanche killed three well-known American skiers, and it was soon clear that some mistakes had been made: too many people skiing an unpatrolled slope and skiing too soon after a huge snowfall, among others. Fox doesn’t deny any of that. “They died in an accident,” he says. “Nothing more.”

But he says the conditions that led to the accident may become more familiar. They were similar to what weather forecasters are warning about, he says – winter rain, longer periods between snowstorms and extreme snowfall. “The avalanche,” he says, “serves as a wake-up call that as the atmosphere changes, the mountains are changing too.”

I had read the Times’ original report, and it was riveting. So is Fox’s account of the storm. But the meat of this book, at least for me, is really in the second half. That’s where Fox takes off for Europe, attempting to find out what’s happening with the weather – and with snow – elsewhere.

He visits some famed resorts, talks with people in the know and takes some great runs. And he includes a report on the famed Swiss Federal Commission for Snow and Avalanche Research, which has been around since 1931. Go there, and you’ll see what the country has done to manage its prodigious wintertime snow load. The Swiss are pioneers.

Some of Fox’s organization is a little clunky, but his book is readable, and I found it a valuable asset to my own tour of Switzerland. I didn’t get to visit that old snowfield where I learned to ski, but I’m still going to. Thanks to Fox – and those snow machines on the Bernina Pass — I have a little better idea what to expect.