I had begun to read this novel in print – and gotten thoroughly hooked on it – when two things happened: A copy of the audio version arrived, and I had to make a solo road trip. I switched to listening, and I can attest that whether read or heard, Nancy Horan’s new book is a delight. 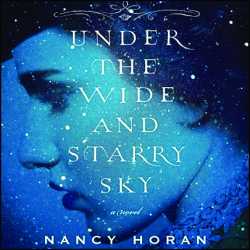 I’ve compared notes with another former English major or two, and I think it’s safe to say that I’m not the only one who didn’t know much about the late 19th-century author Robert Louis Stevenson. Oh, I knew the names of some of his most famous works – Treasure Island, A Child’s Garden of Verses, Kidnapped and the Strange Case of Dr. Jekyll and Mr. Hyde – and I’d read some of them, long ago. And seen the movie in one case.

I vaguely knew that Stevenson was a Scot and that he’d spent some time in the South Pacific. That was about it.

In his lifetime, his books were popular, and he was quite the literary celebrity. His works have also stood the test of time, widely translated and still read. But during the 20th century, critics and English professors tended to dismiss his books as either children’s literature or longer on style than substance. In recent years, his literary reputation has been on the rise again, so maybe today’s English majors and readers in general will learn more about him.

As Nancy Horan’s new novel makes dramatically clear, Stevenson’s life is as rich a story as anything his imagination created.

In particular, Stevenson’s relationship with his wife, the American divorcee Fanny van de Grift Osbourne, has sparked nearly as much disagreement and reassessment as has his literary legacy. During their lifetime, Stevenson’s friends and acquaintances were widely divided in their feelings about Fanny. Some praised her for having almost singlehandedly kept the sickly Stevenson alive and for having encouraged his writing. Others saw her as a temperamental shrew who, along with her children from her first marriage, distracted him and interfered with his writing.

To the historical facts and the many existing journals, letters and other writings by and about the Stevensons, Nancy Horan has added her imagination and insight into the nature of humans and their relationships. The result is a fascinating novel about two gifted and complex people who lived an exotic, passionate life together.

As she did in her widely acclaimed novel Loving Frank, about the scandalous relationship between Mamah Borthwick and Frank Lloyd Wright, Horan lets us see into the world of the woman who loved the famous man. And Horan does more: Managing the admirable feat of seeing through the eyes of both her protagonists, she also tells us much about Louis Stevenson’s life and struggles. In real life, there are usually at least two sides to every story, and Horan leads the reader to understand and sympathize with both Fanny and Louis.

The biographical story would be compelling in itself: Fanny met Louis when she was living in France with her two children, having gone there to study art and escape her philandering husband in California. Her flight had turned tragic when her youngest child fell ill and died, and a Paris doctor had sent her to the countryside to regain her strength. Louis, ten years younger than she, arrived to visit his cousin and other friends in the artists’ colony where Fanny had found refuge. The chance meeting turned out to be life-changing for both of them.

Louis, who had been a sickly child living largely in his imagination, was, despite his father’s objections, determined to be a writer. He fell quickly in love with the exotic American, and though Fanny at first was less than impressed with the skinny, immature, emotional Scot, they soon began an affair.

Eventually, Fanny returned to California, torn as to whether she should reconcile with or divorce her husband. Before long, Louis set out on a difficult trek across the Atlantic and the American continent to pursue her, a journey that broke his fragile health and nearly killed him.

Thus began their life together, a life marked by frequent crises and much traveling in search of a place that would be healthier for Louis. After many moves, they sailed the South Seas and settled in Samoa.

During these years, Louis grew as a writer, producing the works for which we remember him. Fanny, who also had aspirations to be a writer, found herself cast more in the role of nurse and assistant.

Horan tells this story vividly, enriching it with insights into the often stormy relationship. The difficulty of being an ambitious, creative woman in the days before the feminist revolution is a major theme, but it is far from the only theme in this rich novel. In exploring the volatile relationship between Fanny and Louis, Horan has much to say about such things as love, loyalty, marriage, family, genius and creativity.

Those who listen to the audio version will be further delighted by Kirsten Potter’s wonderful reading, especially her delivery of Scottish and American accents.